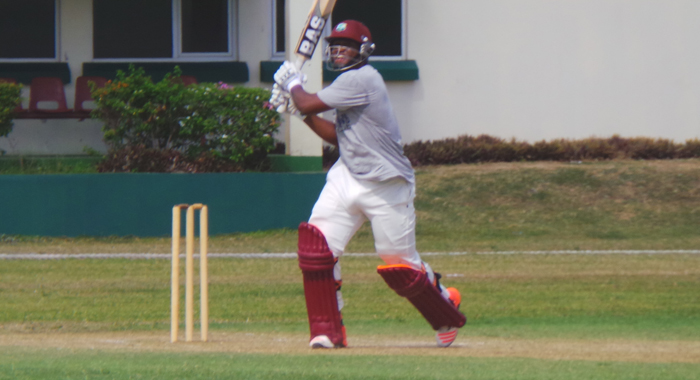 News Spartans Gidron Pope hooks for six during his 44.

West Indies U19 opener, Vincentian Gidron Pope has been called up by the Windward Islands Volcanoes for this weekend’s match against Guyana in St. Lucia.

Pope, one of the West Indies standout players on their way to winning the ICC U19 tournament for the first time, is said to replace one of either the out-of-form batsmen Tyrone Theophile or Keddy Lesporis, both of whom have struggled for runs this year.

On Sunday, Pope stroked 44 in The News Spartans’ 95 in their 8-wicket defeat by defending champions, Team Rivals, in the NLA T20 tournament.

Pope continued where he left off in the World Cup as he went after the bowlers after a somewhat quiet start. Credited with five overthrows to get off the mark, the pugnacious lefthander then brutally straight drove offspinner Casmond Walters for 4 before shattering the “pane barrier” when he smashed the next ball into a window in the Players Pavilion.

Mainly off strike from the pacey and confrontational Kesrick Williams, Pope then took the only points available in the brief exchanges towards the end of the bowler’s spell.

He attempted in his usual predatory manner to advance to Williams, who, on seeing his movement, went for what should have been a quick bouncer, which Pope, still moving, forward hooked for 6 in front of square.

But with only 4 overs allotted per bowler, Williams could find no time to respond.

Team Rivals then chased down the target in quick time as they reached 98/2 in 10 overs. Hooper completed a good all-round match with a blistering 53 off 28 balls with 6 fours and 3 sixes to send his team through the preliminary round of the competition unbeaten.

Guardian General Saints’ innings got off to the worst possible start when opener Joey Welcome was floored by a vicious bouncer to the side of the face by Ray Jordan. He was forced to retire hurt, groggy and visibly in pain.

However, with wickets falling steadily, Welcome returned to the crease to play a brilliant counter-attacking innings of 59*. He took on all the bowlers including Jordan whom he cut over point for 6 and slashed for fours to third-man. In all, he struck 4 sixes and 4 fours in his entertaining innings. Browne led the bowling with 2/19 from four overs.

Results of other matches

SCORES: Radcliffe Too 141 for 8, Calvern King 79, Bowling for Combined Youths

Oneil Endeavour 44, Geron Wyllie 36 not out, Dexter Whinfield 27 not out