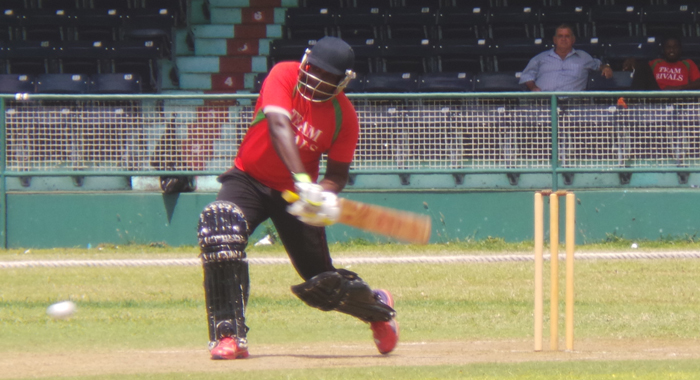 Defending champions, Team Rivals, and Lime Radcliffe will contest the final of the NLA T20 competition this Sunday at the Park Hill Playing Field at 2 p.m., after both teams comfortably beat their semi-finals opponents.

Team Rivals put on a professional display to go past the lawmen.

Winning the toss and batting first, Team Rivals found themselves up against it in the early stage as they struggled to get on top of the bowling and were 42/3 at the end of the 10th over. In that period, they lost Asif Hooper (1), Marvin Small (17) and Hyron Shallow (10). Team Rivals could have found themselves in even more trouble had a chance offered by Harley Skerritt been taken when the batsman was yet to reach double figures.

Skerritt, capitalising on his good fortune, then joined with Casmond Walters (38) in adding 44 for the fourth wicket before Walters was LBW. Walters struck 4 sixes and 1 four.

Skerritt then took over the scoring in the innings and, taking advantage of some loose bowling, motored the score along.  He made 55, including 3 fours and 4 sixes.

Police 2, needing to score at just about 7 an over, were dealt a telling blow when their lead batsman, Salvan Browne (0), went off the final ball of the first over with the total on 7.

It was a blow from which they never recovered, as, despite holding wickets in hand, they were never up with the rate. Opener McCleon Williams (35) and Danson Andrews (37) added 63 for the second wicket, but in 13 overs. The partnership was broken when Williams lost his middle stump to West Indies U19 pacer Obed McCoy 1/27.

In the end, the task was too much as the experienced Team Rivals’ bowling remained focused and disciplined to the end with offspinner Walters 2/19 from 4 and veteran legspinner Olanzo Jackson 2/19 from 4 as well leading the way.

In the other match, Lime Radcliffe, capitalising on a number of fielding lapses, reached 210/1 thanks to a record unbroken second-wicket partnership of 202 between Jumo Toney and Romario Pierre.

The pair came together when opener, Kadir Nedd (5) went with the total on 8, and, taking full advantage of the poor fielding on News Spartan,s “made hay while the sun shone”.

Toney, who stuck 5 sixes and 10 fours, like all at the ground, looked on in amazement when successive balls lofted to the fielder at deep extra cover was put down in unbelievable carbon copied fashion. News Spartans, who were taken through catching drills by player/coach Nixon McClean prior to the start of the game, looked woefully inept at holding on to a single chance on the day. Pierre struck 6 fours as he played the supporting role in the “Sunday afternoon carnage at Arnos Vale”.

With champion batsman, Gidron Pope away on senior Windward Islands duties, Spartans, whose name is derived from ancient Greek warriors, succumbed meekly for 64 in 13.4 overs with pacer Delorn Johnson grabbing 3/12.