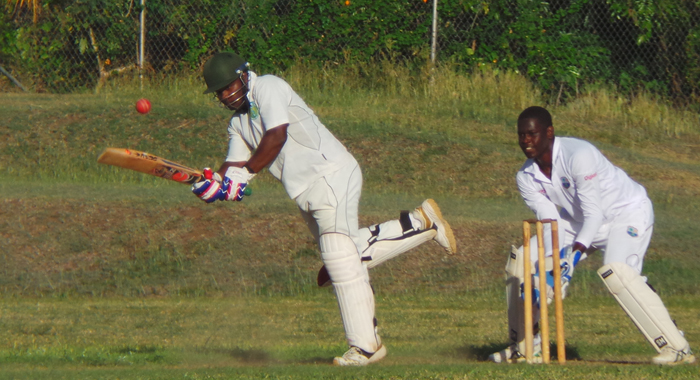 St. Vincent and the Grenadines top order batsman, Donwell Hector hit a blazing unbeaten century as Victors 1 took full points from News Spartans by way of forfeiture in their premier division match in the NLA National cricket championship at Arnos Vale TWO on the weekend.

Winning the toss and batting with eight men, News Spartans were indebted to Kurtlan Lavia who spanked an attacking half-century.

The team’s captain, Seon Sween, had made a blunder by not listing a full 11 for the match despite the suggestions of umpire Maria Abbott and while other players arrived after the commencement of the match, they were unable to take part.

Batting at number four with the total 26/2, Lavia joined forces with West Indies U19 opener Gidron Pope in adding 73 for the third wicket, with Lavia being the aggressor. He was not afraid to use the aerial route to dispatch the balls, which were in his half of the pitch, resulting in the loss of two balls, which were struck into the river.

Pope, on the other hand, was prepared to drop anchor as he attempted to bat his team to a competitive total in tailor-made batting conditions. His first boundary did not come until his 37th delivery — an indication of his watchful approach. The partnership was broken when Pope (38) was well caught off his own bowling by offspinner Damaul Phillps with the total 109/3. He batted 129 minutes faced 71 balls and struck 3 fours and 1 six.

“He took a really good catch because I hit that real hard,” Pope said of his dismissal.

Lavia (62) continued his “all guns blazing” approach, but his innings ended when he was run out in a mixup with Mica Joseph. He faced 67 balls, batted 111 minutes and struck 5 sixes and 1 four.

The innings ended shortly after 153/7 with Phillips 2/32 leading the bowling.

Victors 1, smelling a chance to press home the advantage, went on the attack from early with openers Atticus Browne and Chrisroy John (28) getting regular boundaries and taking the total to 47 in 5.4 overs, before John went. His dismissal brought Victors 1 captain Hector to the crease and in the hour batting he unfurled his wide array of shots on both sides of the wicket.

Hector and Browne added 168 unbroken for the second wicket in 14.2 overs as the News Spartans players were involved in some serious “leather chasing”.

When stumps were drawn, Hector was unbeaten 116 and Browne 59. Hector batted 60 minutes, faced 57 balls and struck 18 fours, while Browne, who batted with the discomfort of a swollen face courtesy of a beach attack by four assailants, struck 9 fours and 2 sixes off the 47 balls he faced.

The innings was not without incidents with umpire Goalan Greaves awarding five penalty runs to Victors 1 after News Spartans captain, Sween had ignored several warnings about what the umpires deemed were his deliberate time wasting. News Spartans offspinner, Teron Simon was also called by presiding umpire Greaves for an illegal delivery.

The following day, Sunday, the match was awarded to Victors 1 when only six players for News Spartans turned up for the start.

Cricket officials say the News Spartans will have to fork out EC$200before they would be allowed to continue in the competition.