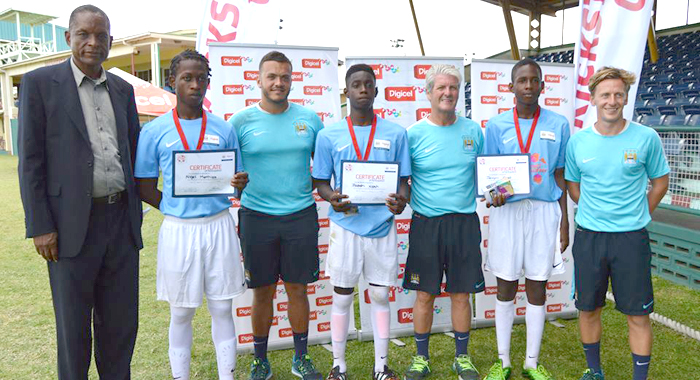 Three young Vincentian footballers were selected during the local leg of the Digicel Kickstart programme to travel to Jamaica, where they would continue to train with coaches from Digicel/Manchester City FC.

The “glamorous three” were selected from a group of 30 wide-eyed expectant youth footballers who gathered at the Arnos Vale Sports Complex on Wednesday and Thursday as part of the final stage of the Digicel Manchester City FC Kickstart programme.

Following the hosting of the programme in different geographical areas across SVG, the most talented and most disciplined 30 youngsters between ages 14 and 16 were selected to showcase their skills before coaches from Manchester City FC Football Academy.

And after what the coaches said were a lot of “head scratching” and mind changing and discussions, the final three were selected.

Information suggests that for the past eight years, the Kickstart programme, which is being conducted by a second English Premier Division club in that time, has helped thousands of players across the Caribbean and Central America to benefit from world class training by coaches from top football organisations, and take their game to the next level.

The partnership now with Manchester City FC continues on the original path of having coaches from the partner club’s Football Schools programme traveling to the region to deliver these intensive training courses as part of the Digicel Kickstart Clinics.

Lewis Childs, one of the visiting coaches, speaking to the media on Wednesday said, “We believe that this partnership between Digicel and Manchester City provides a great opportunity for young aspiring footballers to gain an insight into what it really feels like to train as a Manchester City player does. It would be a fantastic story if one of the players were to make it unto a higher level after going to the Man City Academy.”

Asked about the difference in the standard he had encountered across the region, Child said that he saw a lot of promising young players and the talent just needs to be harnessed properly.

“There is certainly a technical base for someone like me as a coach can work with. The players are certainly eager and this is a good start”.

Child said that while he wants the players to develop their skills, he is also of the view that they must put a great deal of efforts in their academic work as well.

“We believe in developing a well-rounded person not just a footballer and therefore young players must have a desire to look at education as well”.

The sessions focused on putting players in realistic game situations to challenge their decision-making abilities during the game.

Among some of the areas covered in the course are techniques of play: varity of receiving techniques; spatial awareness; selection of pass: skill zone; ball retention; technique practice; game practice; small sided games.

President of the SVG Football Federation (SVGFF) Venold Coombs, speaking at the closing of the programme, commended Digicel on their initiative but urged the company to join his organisation “on its journey to develop football from the grassroots level and up”.

He said that the company has done a lot but he will be very happy if they can assist the SVGFF with some of its youth programmes.

In addition to SVG, this year’s programme will be conducted in Anguilla, Antigua and Barbuda, Barbados, Dominica, El Salvador, Grenada, Haiti, Jamaica, St. Kitts and Nevis, St. Lucia, Suriname, Trinidad and Tobago and the Turks and Caicos Islands.

The best three participants from each session will go on to attend the Digicel Academy and following that, eight will be selected to continue training for a week at the City Football Academy, Manchester City’s elite training and youth development facility in Manchester, England.

While there, the players will get a unique opportunity to experience life as a professional footballer — learning the tactics and strategies employed by Manchester City FC first team players.