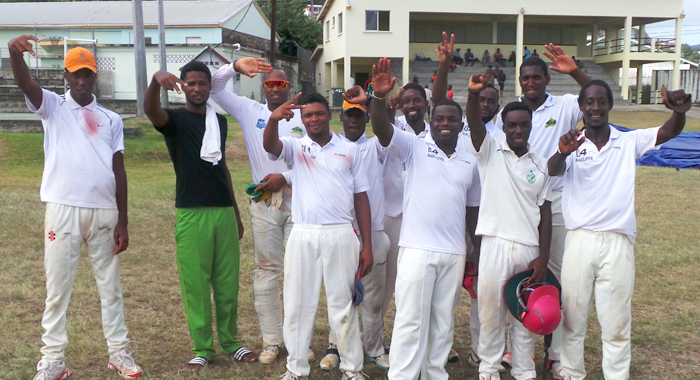 LIME Radcliffe are the 2016 National Lotteries Authority Premier Division champions after beating defending champions, Team Rivals by 25 runs in their tournament deciding-match at the Sion Hill Playing Field on the weekend.

The new champions ended the season with 132 points after beating all their opponents outright, while the dethroned champions tallied 113 points.

LIME Radcliffe, asked to take first knock on a slow Sion Hill Playing Field wicket and only playing with 10 men, found things difficult from early with the batsmen playing and miss amid a bevy of confident appeals.

They lost opener Kadir Nedd (7) LBW to Casmond Walters with the total on 11 off the final ball of the fourth over. Romano Pierre (20) and Urnel Thomas (18) added 28 for the second wicket before Thomas had his stumps disturbed by Walters at 39/2.

LIME Radcliffe, who were without the services of Rodney Lawrence, one of their top run-getter this year, owing to a slight hamstring niggle, lost wickets steadily as the batsmen appeared unwilling to put their head down, despite six of them getting into double figures. Otheil Lewis (21) batting at number six got the topscore while Pierre batted 97 minutes and faced 59 balls for his 20.

Team Rivals, with a job well done with the ball, then went to the wicket with the sole intention of consolidating their position and the chance of a fifth straight title.

But LIME Radcliffe, who had looked the more professional and committed unit all season long, put in another impressive spell with the ball as Lewis rose to the occasion with 4/34 from 15.2 overs with four maidens.

With a lead of 23, LIME Radcliffe, still revelling over the turn of events, were quickly shocked into reality when Nedd (0) sent back Team Rivals captain Asif Hooper (2/15) in the second over.

LIME Radcliffe went to lunch at 51/3 with Pierre (7) and captain Lindon James (8) joining Nedd in the hut. They still appeared in control of their destiny, however, this seemed only a façade as wickets once more tumbled apace after the break with SVG U19 player Urnel Thomas (42) who looked the part going at 67/4. After his dismissal 16 runs later, 3 more wickets went down at the same total as LIME Radcliffe slipped to 83/7. They were eventually dismissed for 104 with Walters taking 4/23 and Orlanzo Jackson 2/19.

Set 126 for victory, Team Rivals, who went into the match without the mercurial Hyron Shallow, were quickly on the ropes when Johnson (3/22) won an LBW call against Hooper (0) without a run on the board.

Husani Porter (3) was bowled by a Lewis fast ball at 2/5 while Walters (1) was magnificently caught low down one handed by Johnson at slip off Lewis.

It was soon 4/15 when Johnson removed Marvin Small’s (10) offstump in spectacular fashion as the batsman attempted a drive. Romano Grant got a topscore of 23* while Butler got 20. Dyke Cato, who was bothered by a shoulder problem, battled through pain to take 4/30 in combination with Johnson 3/22 and Lewis 3/59 in dismissing Team Rivals for 102 in 34.4 overs.

Team Rivals were in search of a fifth straight title after being crowned champions for the last four years. Newly-appointed captain, Asif Hooper felt that they did not performed as well as they should have as several times defending champions.

“We were poor this year. We definitely were not the Rivals. We were weak,” Hooper said minutes after relinquishing the tile.

Hooper said that while the bowling continued to perform, the batting was woeful with many of the experience players, including he, failing to consistently put good scores on the board.

“I did hit contribute as I would have liked and so too the others. For instance, I had over 350 runs in the T20 and just about 160 in the Premier Division. That is not satisfactory.”

While some attributed the low scores to the pitch, Hooper said it was a good pitch but a little on the slow side.

Winning captain Lindon James thought his team –which won all their matches outright — were the most consistent and deserved to win and dedicated the win to manager and former captain Julian Jack, who was battling some health issues. .

“We played good cricket all season long and all of our main players contributed with bat and ball. It was a real team effort,” a smiling James said.

He, however, thought that the bowling, which was led by veteran offspinner Dyke Cato who collected over 30 wickets, was the team’s area of strength.

“We had some good performances with the bat with (Rodney) Lawrence and Romano Pierre getting runs consistently but it was our bowling and the spinners in particular who helped us to be successful. And while “Dykie” (Dyke Cato) was the leading bowler, Othneil Lewis, to me, was the fine of the season and I think he has a bright future,” James said.

Lewis, who has been named as a reserve in the SVG 18 man senior team squad, took wickets regularly with good variation and length in his debut season.

James was also full of praise for experienced left-arm seamer, Delorn Johnson who showed a welcome return and fitness.

“Delorn showed good form, bowled long spells and picked up crucial wickets for us and this really helped.”

James said that having beaten Team Rivals to take the 2016 T20 title earlier in the year, they would be looking to take the Super40 title as well later on in the season.