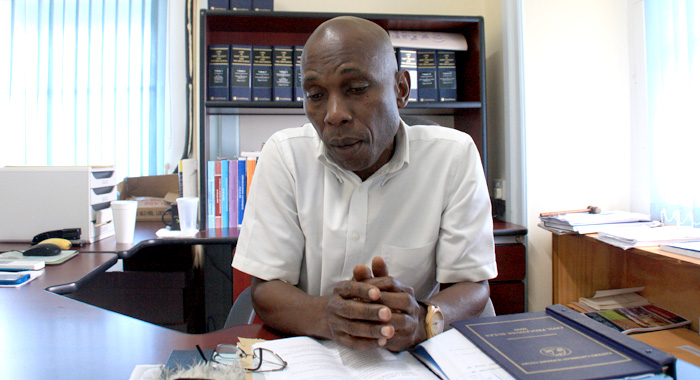 Lawyer Jomo Thomas represented the parent of the child who was expelled from SJCK in 2013. (IWN photo)

Lawyer Jomo Thomas, who represented the mother of the former St. Joseph’s Convent Kingstown (SJCK) student whose expulsion from the school in 2013, a High Court judge has quashed in a judgement this week, has welcomed the court ruling.

Thomas told iWitness News on Wednesday that the ruling by acting High Court judge, Justice Pearletta E. Lanns is “a significant judgment … because it destroys the notion that students who are within the educational system can be treated in whatever way the schools, the teachers, or the institutions feel like”.

Thomas outlined the facts of the case, noting that the then 14-year-old, Form 3 student was suspended after writing in an exercise book a comment that was disrespectful of her teacher.

“Everybody agrees, including the mother of the child, that it was an inappropriate comment for the child to have put in her book in response to what the teacher might have said to her. But everything cascades from there,” the lawyer said.

He noted that the child was sent on two days’ suspension and did not receive any credit for an examination.

But the school, having allowed the student to remain on the roll after the incident in March 2013, went on to tell her parent at the end of the school year in July that she was being transferred to another secondary school.

Thomas said that another issue in the case was whether the school had taken into consideration factors that were not germane to the case.

He told iWitness News that all kinds of extraneous things were taken into consideration and he argued that the student was subjected to double jeopardy.

Thomas said that when the student was allowed to stay in school until the end of year and was given a report saying she should report to Form 4s, the student had a legitimate expectation, based on the report card, that she would remain in the school

He said all of the parties agreed that the child had inappropriately responded to the teacher’s comment, but the question was whether the punishment was disproportionate to the offence.

The Government-assisted Catholic school’s handbook lays out a certain course for disciplinary procedures. “And things for which you would be expelled are like, you bring a weapon onto the school, you become pregnant, you have an abortion, you are a habitual thief,” Thomas told iWitness News.

“The school had some minor things about the child was wearing her fingernails long, the child wore fingernail polish and that the child had walked off. But none of those, based on the school’s handbook, precipitated expulsion.

“So we argued, and the court did agree that the school, in essence, did not follow its own procedure,” Thomas told iWitness News, adding that the court agreed that the decision to expel the child was disproportionate.

“Expulsion is a serious thing. And what the court said is even though the officials in the Ministry [of Education] and at the SJCK did not find the mother cooperative, that in disciplining the child, the standard across the board, in law, is that you have to look at what’s in the best interest of the child.

“So you are not going to punish the child because the mother is whatever,” Thomas said, adding that in his dealings with the child’s mother, “I didn’t find her to be an obnoxious person. I find her to be mannerly, very reasoned…”

Regarding the impact of the judgement, Thomas said:

“You are not going to expect a revolution in terms of the action and attitudes of the education officials or the school officials based on a transaction which may occur. What we can hope is that parents of children would now feel that they have an opportunity to challenge the decisions of a ministry or a given school.”

He said that the child had benefitted from the actions of her mother to challenge the decision of the school and the Ministry of Education.

Officials “wanted to banish the child to a non-performing school, a school which is notoriously poor, which is the Emmanuel High School in Mespo,” Thomas said.

He told iWitness News that based on the mother’s decision to take the matter to court, education officials agreed to transfer the student to Thomas Saunders Secondary School, “which, from all reports, the child performed very well”, he said.

Thomas told iWitness News that the girl, who has since graduated high school, adding that she took  subjects that the school was not offering an passed them at the CXC level.

“So we kind of checkmated the action, which, in our estimation, was punitive and which the court said was not in the best interest of the child.”

Thomas said that fundamentally, a decision was being which would have affected the life chances of the child.

“Fortunately, that was thwarted and I am delighted that that so happened…

“And where a fundamental decision as to the future, the life chances of the child is concerned, that the parents must be integrally involved in that decision-making process and where there is to be discipline, that the claimant has to have a right to be heard, the person who is being disciplined has to be told precisely what they are being disciplined for, so that they can respond adequately.”

Thomas said that after the student was transferred, some persons felt that the case was moot.

“And our position is that the case was not moot. And it is proper to go through the case and to have the court rule on that manner in which this child was dealt with because that would be crucial in terms of the way forward.”

Thomas was assisted in the case by lawyer Shirlan “Zita” Barnwell whose “research and writing skills were crucial in laying the legal basis for the case”.

In her July 17, 2016 ruling, acting High Court judge, Justice Pearletta E. Lanns, also ordered that the students’ file/record at SJCK “reflect that she was entitled to be accorded a fair hearing by the Cluny Board on the issue of her transfer/expulsion from the SJCK; and that was not so accorded”.

The judge made a declaration that a recommendation for a student to be transferred/expelled from the SJCK should be made by the Dean of the Disciplinary Committee of the school; that the parent/guardian of the child involved should be given notice of such recommendation after having met with the child’s parent/guardian and the child; that the parent/guardian be also given reasonable notice of the date of hearing by the board to determine the issue of the transfer/expulsion, and be supplied with the relevant information and documentary evidence in advance of the hearing so she/he can adequately prepare himself/herself for such meeting.

She also declared that once the Board has voted for the transfer/expulsion, then it is the chairperson of the Board’s Secretary or the Chairperson’s delegate who should make the requisite request of the Ministry that a student be transferred from the school; that, unless the senior education officer is directly/personally affected, he or she should bot be present at a hearing to determine whether or not a student should be transferred or expelled from the SJCK or other government-assisted secondary school which is run by a board of management.

The judge also made an order that if the parties cannot agree on costs, they may make brief submissions within 30 days of the date of receipt of sealed copies of her ruling.