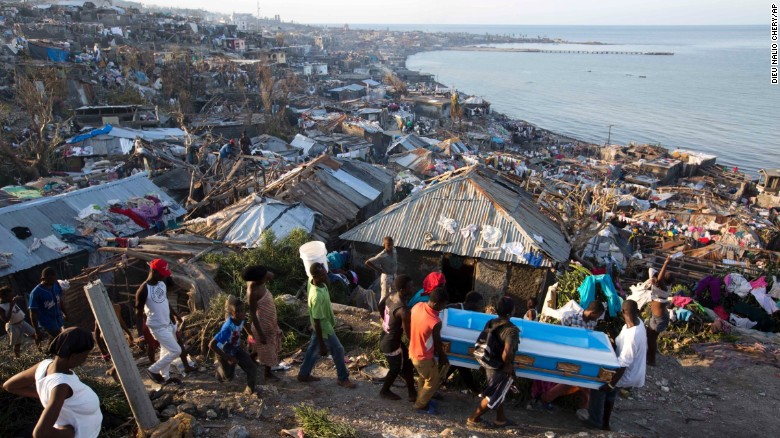 In Jeremie, Haiti, Hurricane Matthew claimed the life of a pregnant woman, whose remains were carried in a coffin by local residents on Friday, October 7, 2016. (CNN photo)

“There are still five or so communities, maybe a little more, where we have not been able to establish communication. From the aerial assessment conducted, most of the buildings in that area were significantly destroyed.

“And if I may use this analogy, it is almost as if a bomb was dropped in that particular area. We’ve not heard from persons,” Ronald Jackson, executive director of CDEMA, told the Caribbean Media Corporation (CMC) Wednesday night after meeting with three Rapid Needs Assessment Teams (RNATs) his agency deployed to the Bahamas last week.

Jackson, who visited Haiti prior to his arrival here as part of a Caribbean Community (CARICOM) delegation headed by Dominica’s Prime Minister Roosevelt Skerrit, told CMC that his agency recognised and is concerned about the increasing instances of cholera in Haiti.

He said that CDEMA has noted that over 200 suspected case of cholera have been reported and 72 of those had been confirmed through medial testing.

“This is something that is being looked into quite seriously and the impact on the water supply systems in that areas.”

Jackson said that the relief needs in Haiti remain very much apparent, adding that while co-ordination is happening within the capital, Port-au-Prince, there is still a need to coordinate within the departments themselves.

“And so CARICOM will be focusing on Les Cayes and Jeremy,” he said, mentioning two of the areas worst affected by the storm.

“We will be providing support to 30 per cent of the population that has been identified in at least two of these areas as being in shelter — maybe a little bit more but that is our initial target, recognising that others are supporting and as part of the recovery-reconstruction support, we want to focus also some efforts on addressing the school infrastructure.”

Jackson said more than 300 schools were damaged, resulting in over 200,000 children not able to go to school, and that is an area on which CDEMA wants to focus.

“We recognise that the water supply systems are a priority. We are going to have a dialogue with the Caribbean Water and Wastewater Association to see whether or not there can be any support brought to that area, but definitely, we will be looking at relief needs,” the regional disaster management chief said.

“Mobilisation around that has started, both within the context of national programme for helping Haiti, but we will also be doing something out of CDEMA as a jumpstart to that process, looking first at Les Cayes and then at Jeremy, but that situation is still one that is quiet concerning, given the numbers.

“We are looking at over 1.5 million, close to two million people who would have been directly affected by this event in the south-western peninsular,” Jackson told CMC.