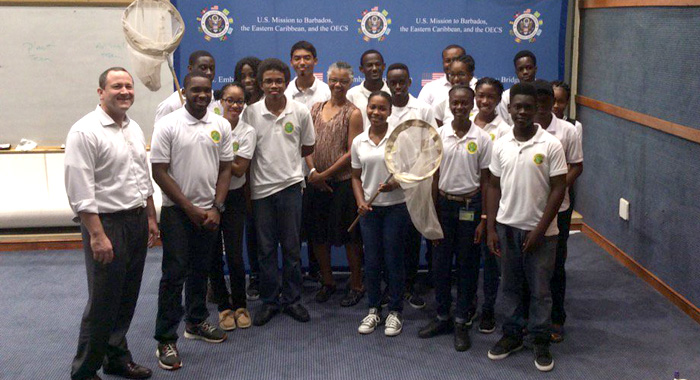 Participants of the citizen scientists workshop pose for a group photo with presenter Dr. Gillian Bowser, and Deputy Public Affairs Officer Jeff Barrus at the conclusion of the session at the SVG Community College.

The U.S. Embassy to Barbados, the Eastern Caribbean, and the Organisation of Eastern Caribbean States is pleased to host Dr. Gillian Bowser, research scientist at Colorado State University, in a three-country traveling program to promote ways ordinary “citizen scientists” can help observe and promote awareness of climate change in their communities. The program travels to St. Lucia, St. Vincent and the Grenadines, and Dominica.

During her visit to St. Vincent and the Grenadines (SVG), Bowser met with science and geography students of the St. Vincent and the Grenadines Community College. After an engaging discussion on environmental issues facing SVG, Bowser led the students on an excursion outdoors where they observed ‎various specimens found in shrubs and plants on the campus, and photographed their finds.

Bowser also conducted a workshop at the Beachcombers Hotel for a group which was comprised of a number of environmental and non-governmental organizations, and members of the local hotel and tourism association. They collected specimens from various plants on the lush grounds of the hotel, as well as from the beach.

“The U.S. Embassy hosted this program because the nations of the Eastern Caribbean are highly sensitive to the impacts of climate change due to their small geographic size, low coastal elevations, and fragile landscapes,” said Deputy Public Affairs Officer Jeff Barrus.

“These impacts can have far-reaching ramifications for regional economic growth and development, public health, and food security. We support efforts to build capacity within the region to adapt to and mitigate the effects of climate change. This begins with widespread awareness of the problem by the general population.”

Bowser is a research scientist at Colorado State University where her research is focused on biodiversity, sustainability, and women’s scholarship. She has devoted much of her efforts to how climate change impacts resources and communities. A native of Brooklyn, New York, she earned a Bachelor of Science in Biology at Northwestern University, a Master of Science in Zoology at the University of Vermont, and a doctoral degree at the University of Missouri — St. Louis. She worked with the National Park Service for over 20 years as a wildlife ecologist, including 11 years spent studying insects, bison and rodents at Yellowstone National Park.

Participants of the citizen scientists workshop pose for a group photo with presenter Dr. Gillian Bowser, and Deputy Public Affairs Officer Jeff Barrus at the conclusion of the session at the SVG Community College.