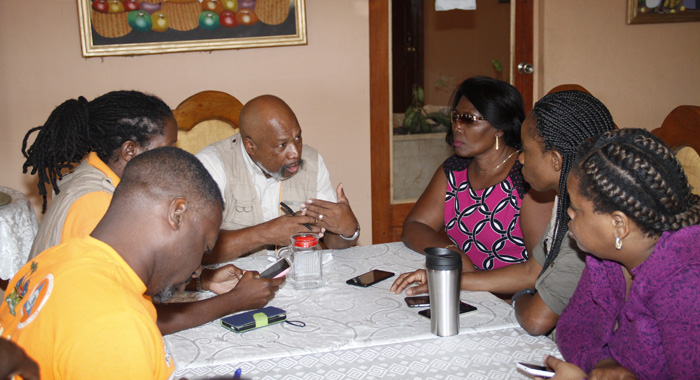 Retired Brigadier General, Earl Aurthur and Mayor Marie Claudette-Regis and their team in discussion about the distribution of CARICOM-sponsored aid for Haitian displaced by Hurricane Matthew. (Photo: CMC/IWN)

LES CAYES, Haiti (CMC) The Caribbean Community (CARICOM) and one of the mayors of this town in southern Haiti have agreed on seven points that will help the community’s disaster relief distribution, which is expected to begin this week.

Since Hurricane Matthew devastated the south of Haiti earlier this month, the Caribbean Disaster Emergency Management Agency (CDEMA) has deployed a team to Jeremie and Les Cayes — two of the areas worst affected by the category four storm in southern Haiti.

On Wednesday, CDEMA announced that it has delivered a shipment of approximately US$53,000 worth of emergency relief supplies to Haiti.

The supplies were procured by CDEMA, through the collaborative efforts of the CDEMA Coordinating Unit and the Office of Disaster Preparedness and Emergency Management (ODPEM), Jamaica.

The Government of the United States facilitated transport of the relief items to Haiti.

“The emergency supplies were sourced in Jamaica, the sub-regional focal point for Haiti, and includes items such as tarpaulin, water, protein, starch, hygiene products and supplies for babies. These are scheduled to arrive in Les Cayes on Thursday, Oct. 20, 2016,” said Elizabeth Riley, deputy executive director of CDEMA.

Between Oct. 3 and 4, Hurricane Matthew unleashed category 4 strength winds and extensive rainfall over the southern peninsula of Haiti, resulting in over 500 deaths with 175,500 persons seeking shelter and widespread damage to houses and infrastructure.

There are fears that the displaced persons could find themselves in an even more desperate situation as rain is forecast for next week in the south of Haiti.

On Tuesday, head of the CDEMA team in Haiti, retired Brigadier General Earl Arthurs, and his team met with Marie Claudeette-Regis, a mayor in Les Cayes, and disaster officials from the area to discuss matters relating to CARICOM’s disaster relief effort.

In a post-meeting briefing, Arthurs told the Caribbean Media Corporation (CMC) that the meeting was very productive and agreed on seven points, including accommodation for CARICOM Disaster Relief Unit members and the Jamaican Defence Force soldiers who are coming to Haiti to assist in the disaster relief.

He said the two sides agreed to use volunteers from the community to assist them with the distribution of the food supplies and building materials.

These volunteers will be given batches to help to identify them as such.

The meeting also agreed that the mayor would help CDEMA to identify areas in which aid should be distributed.

“And that is to keep the commerce going. And the mayor has agree to assist us in ensuring that the prices are steady and that they will give us a list of suppliers for us to use,” Arthurs told CMC.

He said they also reached a consensus about CARICOM exploring the possibility of repairing two schools in the municipality to help in the effort getting children back in classes.

“That is a more long term, it will take a while more because we need to get in the necessary experts to assess and to then repair.”

He added that the coordination will be done through the emergency operations centre (COUD), whose director, Wadson Montisino Cleanador, also attended the meeting.

The COUD will ensure that the CDEMA team and other disaster relief agencies working in the area are properly coordinated so as to avoid duplication of efforts.

The meeting discussed the issue of security and the mayor agreed that all distribution teams will be escorted by at least one police officer.

Meanwhile, some storm victims told CMC that they have not gotten any of the relief supplies distributed in their communities as inadequate security was provided to distribution teams and persons just helped themselves to the supplies.

“Those are some of the things we discussed. We still have other things to do,” Arthurs said, adding that visit to one of the communities after the meeting will further inform what other actions CARICOM could take.

“We want to make sure that we minimise the suffering and we will do everything on behalf of CARICOM to ensure that happen.”

“Some of the other things we are looking at are building supplies and I note the rain started yesterday and we know people are really suffering from the missing roofs and so we are looking at least bringing in some plastic sheeting, some tarpaulin so that they have a short-term relief,” Arthurs noted.

He said that in the long-term, CARICOM is hoping to distribute building supplies that will be used to repair the roofs of houses.

“We will also hope to have some teams that will come in – military teams, that will assist in the repairs. But our focus will be more on getting the school out so that people can come out of the shelters, repair the schools and then the children can go back to school.”

Arthurs noted that CARICOM has also agreed to assist in the area of   agriculture.

The CARICOM Operational Support Team (COST) has been providing operational support to the Emergency Operation Centres in Les Cayes and Jeremie since October 7.

In addition, CDEMA, with the support of the Regional Security System and the Government of Jamaica is also deploying a CARICOM Contingent comprising the CARICOM Disaster Relief Unit accompanied by members of the Jamaica Defence Force.

In a release on Wednesday, CDEMA says the contingent will coordinate humanitarian relief operations and distribution of relief supplies to the affected population in Les Cayes.

In her response, Claudette-Regis thanked CARICOM and CDEMA for coming to the area.

“I am grateful for the food that you will be distributing in the various communities,” she said.

The mayor, however, told the CARICOM team that officials want to discourage the issuing of tarpaulin or plastic sheeting in the city area so they do not become permanent fixtures.

“So, in some cases in the rural areas, you may give out some tarp while the person transitions into repairing their house but we do not want it permanently in the city,” she said.