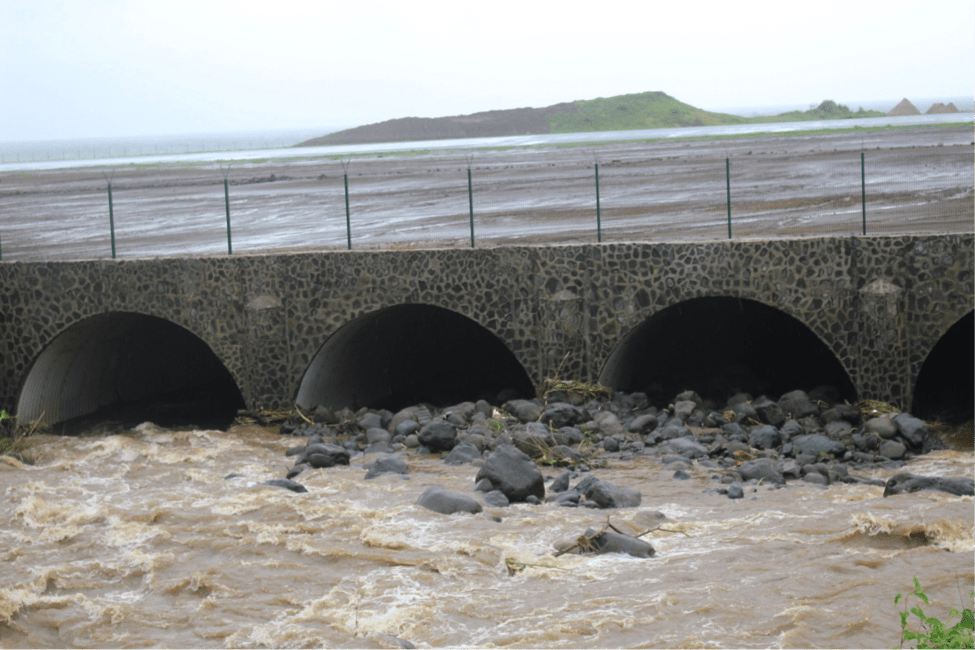 When they straightened the Yambou River they took an “S” bend out of it. They then dug a new channel to replace it. Then dug a great trench and installed a straight half-mile run of galvanised hooped tunneling. Most intelligent people know that when you try and alter nature something else is triggered which some see as a punishment for interfering with it in the first place.

The Cuban engineer had advised against tunnelling and had demanded that the river was crossed by placing a great concrete and steel staunching either side of the river and then a concrete capping across the river resting on the staunching — very simple very normal engineering in a situation like this. Such would allow a machine to drive under the runway and remove rocks and debris. The tunnels simply do not allow that and there is the problem that the engineer foresaw and resigned over the first time whilst arguing with the government over the very same matter.

What they are not telling you is that the river is about four feet shallower than when they first dug it out. The area where you see the digging machine has silted up and filled with rocks.

The tunnelling is sitting on four staunchings which are now at times below the water flow. That was never expected to happen by Gonsalves and his idiot boys at AIDC, but the Cuban engineer knew and he warned them about it.

The problem is that the tunnels are about a half-mile long and the current machine that you see in the AIDC photos can reach in 20 feet or so. But on my recent inspection, I could see in the darkness of the tunnels that the boulders rock and silt are probably the whole length of the half mile of the tunnels and no way of getting them/it out. Which means it will be added to over the next couple of years and the tunnels will become totally blocked. So what will happen if the tunnels block with silt, rocks, boulders and debris? It will overflow, the runway will be undermined and washing away by the wild and sometimes furious Yambou River.

Sorry, I could not take photos several people thought I was crazy wading in the river with a big fishing pole as it was. But that is how I disguised myself on this particular visit. (Did any of you ever read the book Salmon Fishing in the Yemen?)

Therefore, if they open the airport anytime soon, in two years time it will close down for the major engineering job to remove the tunnelling and replace it with the system that the engineer first demanded.

If Stewart Engineering is right and the airport is due to open in December 2017, then it will not be able to open then even because of what I have described above.

The Cuban engineer was right and all the others were wrong, that is the reason he refused to sign the airport off. He could not put his name to the Yambou River problem or to the runway that is built on swamp and water springs.

I am sure not one of you the readers understand the gravity of this situation the cost could well be a $150 million. It may also delay the airport for years, not weeks and months — years.

Can you imagine the rage the Cuban engineer must feel having people telling him how to do his job?

The last three photos were taken and displayed to show the friends of Argyle Airport how IADC is coping with the problem. But I suppose it’s not until someone like me comes along and exposes what they wish to hide that the reality kicks in.

You will all notice the land above the tunnels is like a ploughed field, no compaction whatsoever let alone 94 per cent. They could not compact it because they would have damaged the tunnels. If an aircraft ever overruns the runway it will completely bury itself.

It’s no wonder that Chavez laughed at Gonsalves and said he is a crazy man building a golf course. I am sure you all forgot that?

Ps: I took the first photo the day after Tropical Storm Matthew. The next two, the airport company took in the hope of fooling us all.

I have another serious expose of what has now gone wrong at the airport which is costing multi-millions to correct also. Sorry could not include it here because it again will be long piece with several photos, which I have already taken.