Leacock gives Parliament confusing statement about his future in politics 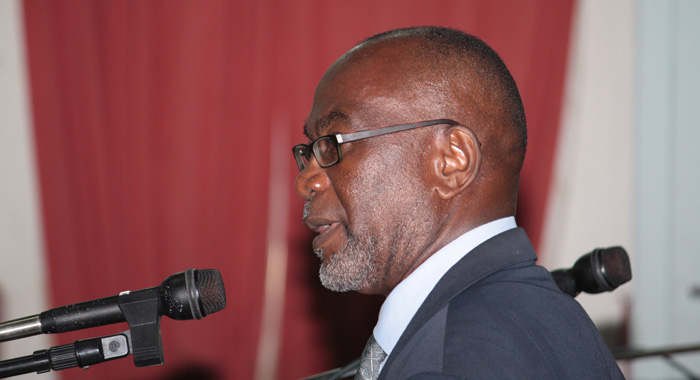 Member of Parliament for Central Kingstown, St. Clair Leacock gave no clear indication of his future in politics in his promised address to Parliament on Thursday.

Leacock, a vice-president of the main opposition New Democratic Party, had promised the statement one week earlier as he spoke on radio about a Facebook post in which an NDP supporter accused him of having “gone into secret meeting with a nasty dirty rapist”.

“Now, these are people who are supposed to be supporters of the New Democratic Party. It happened before your election to the office of president [of the NDP],” Leacock said on the NDP’s radio programme on Dec. 2.

Leacock was addressing his remark to Godwin Friday, the NDP’s recently installed new leader, who was also appointed Leader of the Opposition, was making the first of his weekly appearances on the programme.

Friday, in November, replaced East Kingstown MP, Arnhim Eustace, as NDP and opposition head, after 16 years. Leacock, who like Friday was an NDP vice-president, had been seen as a favourite to fill the post.

Friday told Leacock that he does not agree with those types of posts, but also urged him not to give “credence” to everything that is said about him.

Some persons have expressed surprise at Leacock’s response to the post, which was made by a foulmouthed NDP supporter who attacks anyone who does not support his positions.

iWitness News understands that the post was forwarded to Leacock by a person close to him, who did not inform him about the writer.

Speaking in Parliament on Thursday, Leacock mentioned his long list of service to St. Vincent and the Grenadines, adding that he has served the NDP faithfully and well, including as the party’s spokesperson during the political unrest of 2000.

He said he was also the founder of “NDP Night Time” programme, which gave rise to the “New Times” programme, the party’s daytime radio talk show and main communications outlet.

“I listen to people call in about my absence from the programme. I’m still trying to find space on that programme, that I conceptualised because it is full out; it’s full out, Mr. Speaker,” Leacock said.

Leacock used to appear on the programme on Wednesdays along with his “brother and friend”, MP for West Kingstown, Daniel Cummings, but sources say that a rift has opened up between them.

Cummings told iWitness News last month that that is not the case, but Leacock declined to comment on it separately last month.

In his speech to Parliament last week, which was pitched as congratulation to Friday for emerging as head of the NDP and Leader of the Opposition, Leacock said he is the architect of the NDP’s Spiritual and Social Redemption Charter, but is not often given credit for it.

The NDP says that the charter “gives tangible effect to a national commitment to a just, equitable, confident, fearless, respectful, proud and God-fearing people by providing resources, giving leadership, employing social and economic strategies to reduce the intolerable violence, providing hope for the Vincentian aspiration, tolerance for divergence, love and respect for the dignity of human life and our commitment to the Supremacy of God in all we say and do in building the kinder, gentler society for the 21st century”.

Leacock also told Parliament that he has put down his marker regarding his proposed constituency development fund, adding that he will not serve in a government if that is not a feature in it.

He, however, said that the elevation of Friday to the NDP and opposition leadership has raised “germane issues to the body politic of how one serves or doesn’t serve in one’s own country”.

He also spoke about his electoral performance in Central Kingstown in the last elections. “I’ve increased my support by over 1,042 votes over Parnell Campbell’s historic loss to Ken Boyea in 1998. In that same period, the Unity Labour Party has only garnered an additional 78 votes in that same time period in that constituency,” said Leacock, who was the only NDP politician to increase his margin of victory in the December 2015 general elections, in which the NDP lost for a fourth consecutive time.

He further said that his electoral performance has consistently been above the average of the NDP.

“And I say that to make the point that ultimately, it is the poor people that matter in the determination of the outcome of elections, however much money is invested in it. However much is spoken of by the business elite in St. Vincent and the Grenadines,” Leacock said.

Leacock’s comments in this regard seemed linked to a later statement suggesting that moneyed interest in or around the NDP did not support him as party leader, or that members of the party were not confident that he could raise the finances necessary to operate the party or finance election campaigns.

“Today, I am pained, I have great suffering and humiliation when I witness and experience the onslaught that I face. Some call it friendly fire — my son-in-law says don’t use that term — by those I have given my best years to. In fact, some 35 years to the New Democratic Party; lost my job, lost my business, but that’s how the cookie crumbles. I have no bitterness. That’s political life, Mr. Speaker,” said Leacock, a former executive at VINLEC, who was fired from the state-owned electricity company after the Unity Labour Party came to office in March 2001.

“Why are we congratulating Dr. Friday, Mr. Speaker? Not that he is not deserving, Mr. Speaker, but I took issue, on principle, that we mismanaged ourselves, that we did not follow proper process, Mr. Speaker and I refused to participate in that exercise and I do not apologise for my refusal then and I am not doing so now.”

iWitness News understands that Leacock stayed away from the meeting in which his other six parliamentary colleagues voted five-one for Friday as Leader of the Opposition.

MP for West Kingstown, Daniel Cummings, is believed to have voted for himself. However, after the vote, Cummings announced almost immediately on Facebook that he was withdrawing from the race to become NDP president and had thrown his support behind Friday.

Leacock withdrew from that race at the last minute, before a vote at the NDP’s extraordinary convention on Nov. 27.

Leacock told Parliament that his “principled position” is that he has come to discover that in St. Vincent and the Grenadines “blood is thicker than water; politics is thicker than blood.

Leacock said that since the leadership transition, he had had “two important calls” among those he has received.

He said none of his colleagues, except Senator Jules Ferdinand, had called.

But he received a call from the NDP’s estranged founder, former prime minister, Sir James Mitchell and “a consolation exchange with the Honourable Prime Minister, who, I believe, was straight enough to recognise my worth, my value and political service.

“I don’t think it is unfair to say that the door is open and that it is left for me to see how I spend the rest of my years, whether I want them to be in the wilderness or to make them available to the people of St. Vincent and the Grenadines in a principled manner,” Leacock said.

“At this time, I am conscious of the fact that I am the embodiment not just of St. Clair Leacock but [also] the hundreds of poor, suffering people who have held faith with me for very many years,” Leacock said, adding that the previous Sunday, his 94-year-old mother told him that she was tired and going home and urged him to stand by his principles and not become a victim of materialism and that in the end, his faith will see him through.

“I want, this morning, Mr. Speaker, just a half a minute of your time to extend my hand to the colleagues, here, if you would permit me, by a shake of hands, if you would have permitted, I would have like to do the same thing to the Honourable Prime Minister because I know this nation has not heard the last of me, but, whatever they think of me, would be a principled politician,” Leacock said and proceeded to shake the hands of his colleagues and embrace Friday.

“Prime Minister, would you accept my hand?” Leacock said as he walked over to government benches.

“Did you say you want to embrace me?” said Gonsalves, who Leacock had not allowed to address him as “honourable friend”, saying that he and Gonsalves are not friends and that the prime minister should address him as “Honourable Member”, as the Standing Orders dictate.