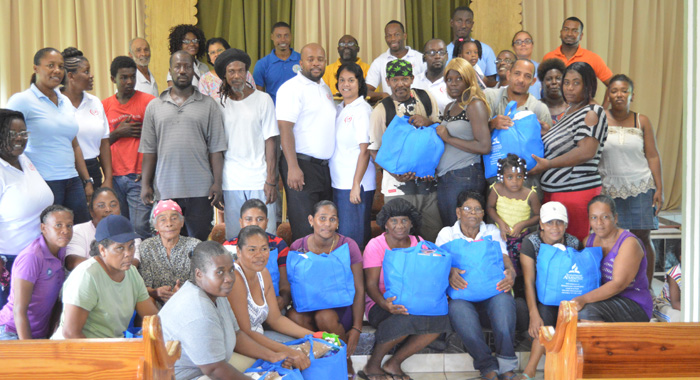 Thirty families north of the Dry River had a happier New Year, thanks to the charity of the Seventh-day Adventist Church, through the Youth and Community Services Departments.

On Dec. 29, 2016, more than 15 volunteers from the Adventist Youth Ministries Advisory Council (AYMAC), along with Youth Director, Pastor Brent St. Jean, Community Services Director, Pastor Ian Williams, and other pastors, joined together at the Sandy Bay Seventh-day Adventist Church for a short service, after which 30 food hampers were distributed to families impacted by the recent trough systems, which affected the northern sections of the island in November.

St. Jean said each food hamper is estimated at a value of $250. The items used to assemble these food hampers came from the annual “We Can” Concert on Dec. 18th at Heritage Square.

St. Jean thanked the people of SVG for contributing to the worthy cause, as well as those business places who promoted and donated to the venture, including: Facey Trading, IADPA Book Stores, ECGC, SVG TV, Hitz 103.7 FM, The News newspaper, and the Nine Mornings Committee.

President of AYMAC, Jacqueline Creese, expressed thanks to all those who performed during the concert to help make the initiative a reality.

Community Services Director, Pastor Ian Williams, brought greetings from the administration of the church and further expressed the commitment of the Seventh-day Adventist Church to continue to offer help to those who are less fortunate and those who have been impacted by disasters.

The service concluded with prayer and expressions of gratitude by the recipients of the hampers, as well as, a renewed call from the youth director for other persons and business entities to partner with the “We Can” initiative, which attracts hundreds of persons to Heritage Square every year.