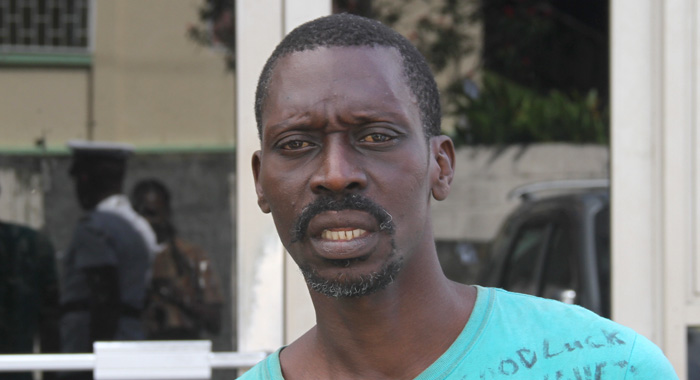 Curtis Joseph says he was on the scene under the influence” when he attempted the burglary. (IWN photo)

While most Vincentians were enjoying a quiet New Year’s Day, Curtis Joseph was taking advantage of the minimal activity in capital city Kingstown to try to burglarise Coreas Drinks Division on Lower Bay Street.

He told Magistrate Bertie Pompey at the Kingstown Magistrate’s Court on Tuesday that he was guilty that with intent to commit burglary on Coreas Drinks Division, he did and act that was more than merely preparatory to the commission of the offence.

The court heard that around 3:15 p.m. on Sunday, Victor Daniel, a security guard, was on duty patrolling the Coreas compound when he saw Joseph with a bolt cutter attempting to cut off a padlock at the business place.

The other security guard wrestled with Joseph and was able to subdue him and summoned the police, who responded and took Joseph into custody.

The court heard that Joseph denied to police that the report of the security guards was true.

He, however, pleaded guilty in court.

When asked what he had to say for himself, Joseph, who was bare feet, told Pompey that he was “on the scene under the influence… Someone influence me”.

Prosecutor Station Sergeant of Police Elgin Richards told the court that Joseph is a repeated offender and made a submission for a custodial sentence.

Richards asked the magistrate to impose a “sentence of quality”, noting that the section under which Joseph is charged, it was as if he had in fact committed the act.

He asked the magistrate to impose on the defendant such a custodial sentence that when he comes out of prison, there would be a change in his life.

Before handing down sentence, Pompey said he had taken Joseph’s guilty plea into consideration, but added that the defendant has a long history of criminal offences.

He said that Joseph had recently been released from prison after completing a six-month sentence imposed on him in August.

“It appears that there is no hope of redemption and as such, I have to protect society even for a short period,” Pompey said and jailed Joseph for three years.

“And consider yourself lucky,” the magistrate added.