Ole George to hang up boots after three-day walk in St. Vincent 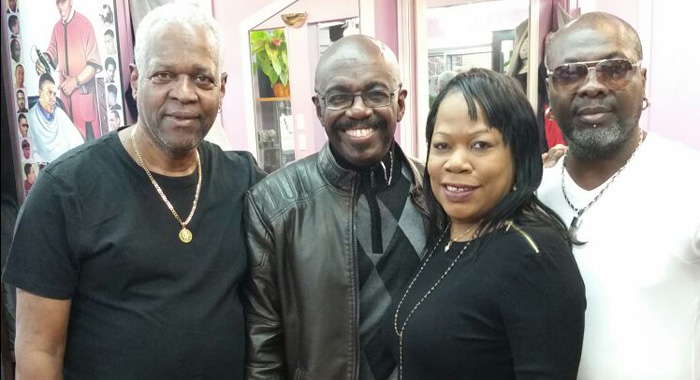 Daniel, who currently resides in Montreal, Canada, is part of a group of overseas-based Vincentians who are looking to make a difference where HIV/AIDS and other health-related issues are concerned.

George will be returning to his homeland to deliver care packages to the needy, and to take it “a step further”, by doing a three-day walk, from Feb. 3 to 5.

This walk, Daniel said, will be his way of saying goodbye to an exciting career of distance walking.

“What better way to do it than for a worthy cause and in the presence of the very people who were there to witness the first historic event,” George said.

He further stated that this walk will be done with walking partner Joel Butcher who walked with him from 2005-2008. He said that the walk will be his way of helping to bring much-needed attention to the rising cases of HIVAIDS and diabetes and also mental health.

“The Group is called ‘WE VINCY’ and was newly formed in Montreal, and is comprised of Vincentians who share the same concern for persons living with HIVAIDS and diabetes in St Vincent and who has mental health issues.

“We hope that our efforts will serve to improve the standard of living to these people and bring some hope to their world.

“We have embarked on collecting food items and whatever else that is needed to make life easier for them. We are also going to propagate the message of a healthier lifestyle while we are at it,” Daniel said.

“After several conversations with Sydney Joseph, better known as ‘Pumpkin’, sometime last year, I decided to bring the group together. Pumpkin, as you know, is HIV positive and is St Vincent’s leading HIV/AIDS activist.

“We decided to mobilise and get some items together to send to persons affected by HIV/AIDS.

“These items will be delivered when I come home for the second part of the exercise,” Daniel added.

Other members of the group include Steve “Daddy Ghost” Victory, Monica Homer, Stephany Etienne, Hilton Smith, Garvey Thomas, among others.

Daniel, who is a trained clinical social worker and who currently works in the Arctic Region of Quebec, Canada among the Inuit people, said that this walk will be very significant, and he hopes that all Vincentians will come out to salute him and Butcher as they walk through their communities.

“It will be the end of a very exciting era and certainly the closing chapter of a very important part of Vincentian history,” he said.

Ole George and Joel Butcher will walk from the country’s windward and leeward ends of mainland St Vincent, with ventures into the Marriaqua and Vermont Valleys, to be followed by a rally at Victoria Park.

“The rally will be about bringing awareness to the HIVAIDS situation in St. Vincent and also to encourage a healthier lifestyle so as to prevent more cases of diabetes. There will also be a focus on mental health. “The overall message here would be we need to be our brother’s keeper,” said Daniel

“I believe there is a void where HIV/AIDS education and awareness is concerned, and I am hoping to make some inroads into that, along with Pumpkin and other like-minded persons who will be participating in this exercise.

“I am encouraging all walking groups/clubs, sporting organisations, health enthusiasts and anyone who is concerned about the present health situation in the country to come out and join us as we walk. Let’s do this together.

George accomplished similar feats in 2003, 2004, 2005, 2006, and 2007, in St. Vincent and has walked in Jamaica, Grenada, St. Lucia Barbados.
The longest of the walks was 2008 in Brooklyn, New York when he and Butcher walked around Prospect park for eight consecutive days, challenging the Guinness World Record for the longest walk without sleep.

In 2012, George completed a five and a half day dance marathon in Nunavik, Northern Canada, to bring awareness to suicide.

“It’s my hope that what we are about to embark on would bring the much-needed attention to these very important health issues in my homeland, and that people will see that these issues affect us all.

“There is a slogan which I have coined that I hope will be etched forever on the minds of every Vincentian ‘My Mosquito Is Your Mosquito…’ Meaning if something affects me, it can and may eventually affect you, too, so don’t wait until it comes your way before proactively dealing with it. The young man or woman who is HIV positive and you may think is none of your concern, maybe the same person who can end up dating your son or daughter. We all have to act together to get these issues under control.”

George is appealing for others to come on board with this initiative, and to contribute of their time, talent and treasures, in an effort to make the initiative a success.