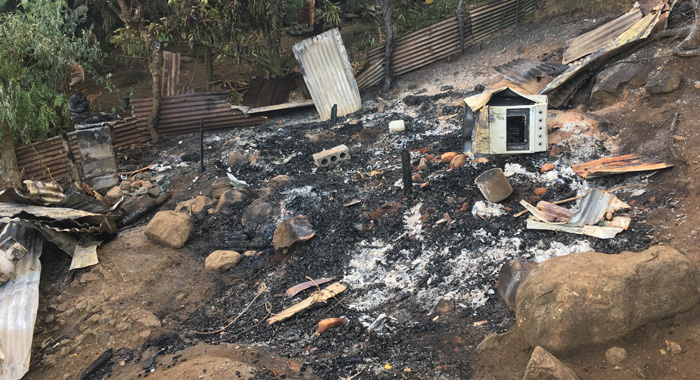 The remains of the house in Ottley Hall. (iWN photo)

Police are investigating the death of an 18-month-old baby boy whose body was recovered from the remains of a burnt-out house Sunday night in Ottley Hall, a community in West Kingstown.

Police spokesman Inspector Hawkins Nanton told iWitness News that three children were in the house when the blaze was discovered.

Two girls, ages 3 and 5, were rescued and are in hospital, where they are being treated for first- and second-degree burns, Nanton told iWitness News on Monday.

The youngest of the children who were in the house is believed to have died in the blaze Nanton said, adding that police investigations continue.

The police spokesman said that the children lived in the wooden house with their parents, Winston and Roxanne Welcome.

The Welcomes have fourth child, younger than the one who died, but that child was with Mrs. Welcome, iWitness News understands.

The house was a one-bedroom wooden structure erected on stilts, and Christopher Baptiste Sr, one of their neighbours, rescued the two children through the floor of the house.

Fire-fighters had to use water from the Baptistes’ home to tackle the blaze as the area is inaccessible to vehicles and the nearest motorable road almost a quarter mile away.

Baptiste was alerted to the fired by his son of the same name, who turns 9 on Wednesday.

He said he was in the patio chatting with his mother when his son came and told him that the neighbour’s house was on fire.

He said he immediately thought about the children, telling iWitness News, “Because we know that the lady does leave the kids in the house all alone”.

Baptiste said when he heard of the fire, he did not know that the entire building was already engulfed.

He said it was impossible to go into the house, but he saw the foot of the older of the two girls hanging through the floor of the house.

Baptiste told iWitness News that his girlfriend attempted to grab the child but the heat was too intense.

“So I went in now and grabbed her foot and I pulled her out and I put her in the direction of my girlfriend and the rest of them (onlookers).”

He, however, said that he noted the foot of another of the children coming through the floor of the house.

“I just had to tell myself, ‘My brother, you have to brace this heat because you have to try and get that child out.’

“When I made the grab, I grabbed her by the upper part of her left foot. I feel my hand slipped because it seems as if she was already burned.”

Baptiste said he wedged himself even more under the house and was able to pull the other child out.

He, however, said he was sorry that he was unable to rescue the youngest of the children.

“For me to get in there, they might have been picking me up here too,” he told iWitness News.

Baptiste said that his family has repeatedly warned Mrs Welcome about leaving the children at home alone.

“It is something that she keeps doing. We keep telling her that what she is doing is wrong as a mom. Stop leaving kids to watch kids at those ages. It’s not like one of them is in secondary school,” said Baptiste, who has a child around the age of the one who died.

“Something like this, God forbid, if it didn’t happen now, it would have happened some other time… On numerous occasions, my girlfriend had to come and help that same boy that died. How many times he fell out the house. The last time he fell out the house, my girlfriend had to go and bathe his skin, take pampers from my child, put it on him and make sure give him something to eat until the mom come,” Baptiste told iWitness News