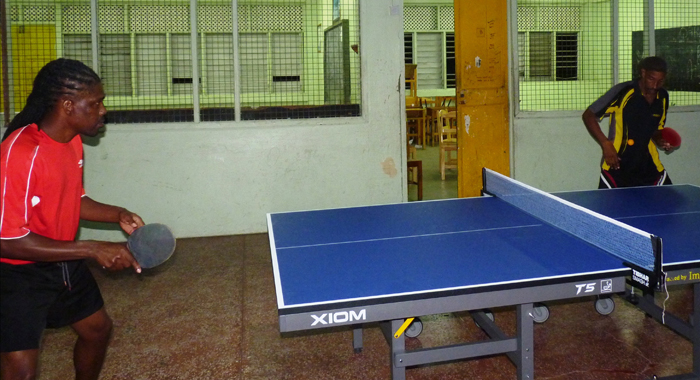 Veteran Robert “Bobb” Ballantyne is currently basking in glory after reaffirming his status as St. Vincent and the Grenadines’ top table tennis player when he won the inaugural Big Six Table Tennis Competition on the weekend.

The left-handed Ballantyne, seen as possibly this country’s most successful table tennis player, won the title when he defeated the 2016 men’s singles champion, Carlton Daniel, in two sets to win the event hosted by the of St. St. Vincent and the Grenadines Table Tennis Association (SVGTTA) on the Grenadine island of Bequia.

The competition, which featured the top six ranked players in the country, was held on Saturday at the Bequia Community High School.

Information coming out of the SVGTTA said number two ranked player, Sean Stanley took the decision to withdraw from the tournament over his disapproval with the manner in which the competition was organized.

The SVGTTA said Stanley’s withdrawal resulted in the number seven ranked player, Javier DeShong being drafted in to fill the vacant place.

All six players received a share of $1000 prize money of the competition, which was played using Three Match Guaranteed format, which allowed for a player to lose three games before being knocked out, the SVGTTA said.

It said Daniel was the only player to be unbeaten in the preliminary stages as he recorded wins over Spencer, the fifth ranked player; Ballantyne, and Dublin, who shares the number two rankings with Stanley.

The SVGTTA said that with the loss to Daniel, Ballantyne was placed in the losers’ bracket and defeated DeShong, Carrington, Spencer and Dublin to set up a final match-up with Daniel.

The Association explained that according to the rules of the competition since Daniel was undefeated he would be adjudged the overall winner should he defeat Ballantyne in the final match up but should he lose, the two would have to play another set to determine the winner.

In a brief address at the start of the competition, President of the St. Vincent and the Grenadines Table Tennis Association, Tyrone Jack, said the decision to stage the first ever national Big Six Tournament in Bequia fell in line with the Association’s promotion of the sport on that island in which it has distributed several table tennis boards to schools and community groups.

Jack also said the association wanted to encourage the young Bequia players by giving them the opportunity to see the country’s top players in competitive action. He said the association is encouraged by the performances of the Paradise Primary School, which won the Boys 2016 inter-primary school table tennis competition and the Bequia Seventh Day Adventist Secondary School Boys, which placed second in the Secondary category — both participating in the competition for the first time.

The SVGTTA President commended Mr. Joshua of Al Hap Shipping and Levi Walker of Imperial Pharmacy in Bequia for their sterling support of the tournament. Jack noted that one of the boards, used in the tournament, was donated by Walker.

The SVGTTA calendar of activities for 2017 will continue with the Open Ranking Tournament #1 of 2017 this Saturday Feb. 18. The qualifiers will commence at 10 a.m., with the main draw set for 1 p.m.