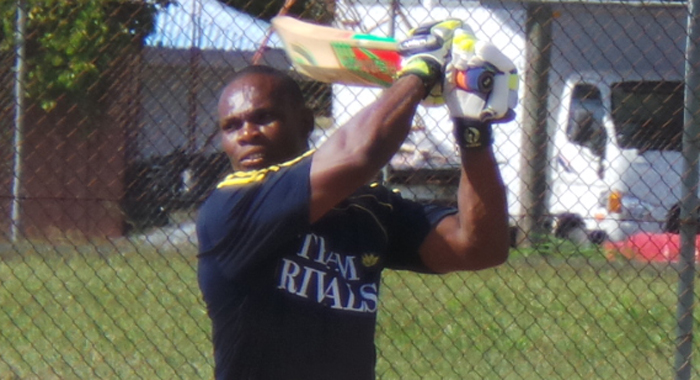 Hyron Shallow continued his rich vein of form with another impressive unbeaten century against hapless Smashers to help Team Rivals to what was a comfortable 39-run victory when Super Six action got going in the 2017 NLA Neil Williams T20 competition on the weekend.

When the two teams met in the preliminary round of the competition, Shallow and Casmond Walters took the Smashers bowling to the cleaners by hitting unbeaten centuries and featuring in a double century partnership.

On Sunday, at Arnos Vale 2, it was Shallow, known to his teammates as “Master”, who got to three figures with another “cut up” innings as he displayed the rasping square cuts, the ever-present late cut and the back cut, augmented by the drives on both sides of the wicket.

He began his innings with three ruthless square-cuts that would have been pride of place in a butcher shop as an indication of his focus for the day. In partnership with Husani Porter (24), 66 was raised for the first wicket. A further 86 was added with Walters (37) for the third wicket before the latter got one that popped off a good length and defeated his attempted drive. Walters, who despatched his first ball onto the airport fence, went with the score 152/2. He struck 1 four and 5 sixes off the 15 balls he faced.

Roneil Jeffrey (2) and Dillon Douglas (4) came and went but Shallow remained untroubled as he bore down on three figures. And with time appearing to run out with him being on 94 facing the final ball of the innings and his 66th, the diminutive Shallow smashed the full toss he received over the midwicket boundary to end with an even 100*.

He scored his runs at a Strike Rate of just over 151 as he lashed 12 fours and 6 sixes in another high-class display of batsmanship to take his tally for the competition to over 350 runs.

Smashers, in reply, put in a worthwhile effort, but fell short by 39 runs, as they ended on 150 for 7 when their allotment of 18 overs ended — the match having been reduced by umpire Goalan Greaves much to the disgust of both teams.

Kirton Lavia (54) led the batting, producing some cracking shots that won the admiration of onlookers and opponents alike. He belted 3 fours and 5 sixes off the 27 balls he faced (SR 200) and took a liking to the always difficult-to-get away Walters (1-42) whom he smashed for 3 of those sixes. Veteran legspinner Orlando Jackson (4-16) was once more the lead bowler for Team Rivals.

Another player getting a century on the weekend was pugnacious opener, Gidron Pope who bludgeoned his second ton in as many matches in leading defending champions, FLOW Radcliffe to a 71 run win over Combined Youths in a preliminary round game on Saturday.

Playing at the main Arnos Vale Playing Field, the scene of his demolition of Victors 1 the previous weekend, Pope used his bulk to great effect as he lashed the attack to all parts of the park.

This saw him counting 10 fours and 6 sixes (SR 158.82) one which came off the final ball of the innings. Geron Wyllie took 3/26 to take the bowling honours for Combined Youths.

Combined Youths were dismissed for 102 in 18 overs with Oneil Endeavour getting the topscore of 47 and Dyke Cato 4/12 and Andy Harper 3/28 the top bowlers for FlOW Radcliffe.

Pope got another half century on Sunday but could not save the defending champs from going down to Guardian General Saints by 24 runs at Sion Hill.

Guardian General Saints with the Windwards Volcanoes inform batsman, Sunil Ambris in their line up batted first and were off to a brisk start despite losing Vincent Cupid for a first ball duck. They, however, lost wickets along way even as the runs came and were 68/4 in 7 overs when Ambris (16) and Rickford Walker (37) were dismissed within one run of each other.

But now a bearded and slim down Jeron “Chubby” John (47) played yet another face-saving innings for his team, with a solitary 4 surrounded by 3 sixes.

North Leeward were dismissed for 98 in 15.5 overs, with Christopher Howe getting 24. Right-arm seamer Norlan Williams and left-arm spinner, Alston Bob both had figures of 3 for 21, while pacer Shaquille Browne took 2/16. Victors One then took 10 overs to get to 99 and lost four wickets in the process with Chrisroy John 36 and Miles Bascombe 26, leading the way.   Howe asked some question in taking 4/23 bowling for Providence Electronic Solutions North Leeward.

On Saturday, Police 2 squandered their chance to pip Smashers into the Super Six by conjuring up a three run defeat to Team Rivals at the Sion Hill Playing Field in one of the remaining preliminary round matches.

Team Rivals who were 93/3 in the 11th over were dismissed for 130 in 20 with Casmond Walters 47 and Hyron Shallow 39 carrying the batting as seamer Sylvan Spencer took 2/20.

Parnel Browne got 35 and Danson Andrews 33 for the lawmen who not for the first time, appeared to have forgotten their “thinking cap” at headquarters. Orlanzo Jackson took 2/21 for Team Rivals.

The six teams in the Super Six round will play each other on a round robin basis, after which the two top teams on points will play a final.