Champions! Victors 1 are just that! 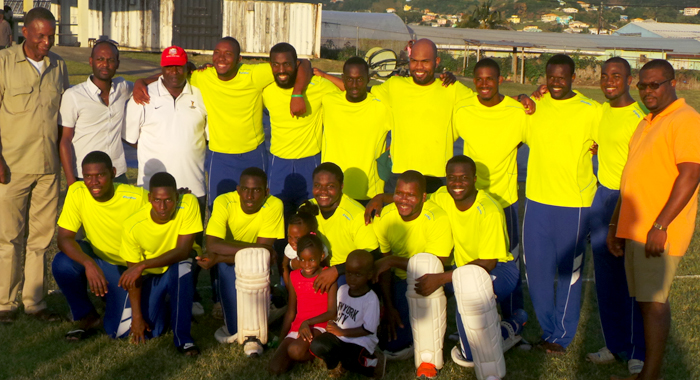 Victors 1 produced a workmanlike performance to win the 2017 National Lotteries Authority Neil Williams T20 tournament with a 4-wicket win over Team Rivals in a pulsating final at the Sion Hill Playing Field on Saturday.

The two captains, Donwell Hector of Victors 1 and Casmond Walters, leading Team Rivals for the first time this season, went nervously to take the toss and it was the latter who spun and the former who called.

It was a call of “heads” and with the coin doing a small roll and with the eyes of both men and umpire Goalan Greaves staring pointedly, it landed heads up. A little pause, then the confirmation “It’s heads.”

Greaves: “What you doing?”

Walters: “Man, like you frighten… You ain’t sure?” Hector: “We frighten? You must be mad!”

Then, openers Husani Porter and Asif Hooper walked to the middle to begin the innings just as Greaves and his colleague, Samuel Holder, decided to have a change in their uniform tops.

They returned in quick order and the match got on the way and almost immediate drama.

After left arm spinner Alston Bobb had bowled a tight opening over, conceding just two runs, Norlan Williams picked it up from the “Car Racing End” and, with his second ball, promptly removed Porter’s (1) legstump in spectacular fashion as he batsman moved too far across. Hooper (0) then, attempting to loft the sixth ball over cover, only succeeded in skying a catch to Miles Bascombe to make the total 2/3.

Team Rivals, who were already handicapped by the absence of talismanic batsman Hyron Shallow, who had decided to take another of his “now regular but unexpected hiatuses”, never recovered from this early loss.

A terrible mix up between Dillon Douglas (6) and Walters saw the former going by the run out route, while Walters (9) was brilliantly caught by Lauron Francois at cover off a powerful cut off pacer Kimson Dalzell at 32/4. Walters faced 27 balls (SR33.33) for his nine runs and failed to reach the boundary.

It was then left to the veteran Deighton Butler (30) to try and post a facing total by shepherding the lower order as the procession continued. He was badly missed by Atticus Browne very early in his innings and Team Rivals in desperate straits. His battling knock, which came off 28 balls and included 1 six and 1 four, was ended when he was trapped LBW by Williams who returned for his second spell-a decision the batsman appeared not to be in agreement with. There were 21 extras in the Team Rivals innings.

Victors 1, who began their innings needing to score less than a run a ball but on a now difficult pitch and facing opponents who possessed great self-belief, found the going tough. Their cause was not helped with the seeming “brain freeze” of some of their batsmen.

Browne (14) chose to sweep Butler off his stump and was adjudged LBW, (23/1) Chrisroy John (6) lofted a catch to deep mid-off off the same bowler, Francois (11) went LBW Orlanzo Jackson the ball after a heated exchange with umpire Greaves over being denied a leg-bye with the total 60/4.

Bascombe (4) who had gotten off the mark with a cracking pull to the square-leg fence off medium pacer Roneil Jeffrey, was comprehensively bowled the very next ball which was a swinging yorker.

Hector, who had failed to find any real form during the tournament, was then called upon to play a captain’s innings and he shouldered the responsibility admirably.

Showing a sense of awareness and curbing his natural attacking instinct, he played with a straight bat but even so was able to score better than a-run-a-ball. His match-high 36 came off 30 balls and included 2 sixes and 3 fours and it appeared that only something special could have removed him from the crease and so it was. Kesrick Williams, who had sent down two steamy overs at the start of the innings, was brought back at the back end. His first delivery was a well pitched up slower ball that Hector tried playing through the legside and was too early into the shot and was bowled at 81/5-the batsman losing his bat in the process.

This wicket revived the hopes of Team Rivals who were further buoyed by the wicket of Shaquille Browne (2) bowled by Walters at 89/6.

Victors 1, though, duly got home with no additional loss much to the delight of manager Venold Coombs and former team captains, Bertram Stapleton, Kaschaka Cupid, Denis Byam and Ian Allen.

Butler finished with 2/6 from his 4 overs and could count himself unlucky not to have earned t Man of the Match award.

Victors 1 lost a solitary match throughout the competition when they suffered a 9-wicket defeat at the hands of 2016 champions FLOW Radcliffe –a result they subsequently turned around in the Super Six phase.

It was the second title for Victors 1, who were declared joint champions with Team Rivals on the Super 40 after the finals came to a controversial end at the Park Hill Playing Field last year.