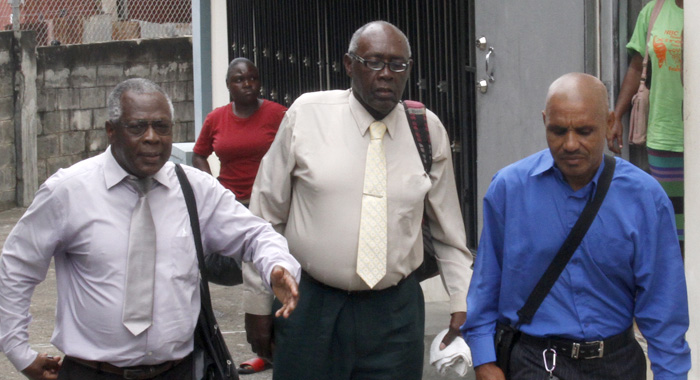 The preliminary inquiry into the Jan. 12, 2015 death of seven students at Rock Gutter is slated to continue on Wednesday, after a months-long adjournment.

The preliminary inquiry, which is into its 10th month, was scheduled to continue on Monday but that hearing did not materialise as the court concluded that there was not enough time Monday afternoon to hear evidence.

After a 30-minute recess to allow defence and prosecution personnel — who had been in court all day — some time to eat, the accused, Ehud Myers, a 67-year-old pastor, and Davanan Nanton, a 36-year-old chauffeur, were called to the dock around 3:35 p.m.

The investigator, Station Sergeant Junior Nero, was ready to give evidence.

But there was some discussion about whether there was enough time to hear the evidence of the investigator in the matter before the court adjourned for the day.

Prosecutor, Adolphus Delplesche, told the court that 30 minutes was not enough time to hear evidence from the witness.

By that time, the clock had eased up to 3:48 and Connell, who is defending Myers, asked the court to hear evidence for 22 minutes before adjourning.

Connell had earlier indicated that he would have no questions for Nero.

But fellow defence counsel, Israel Bruce, who is defending Nanton in the case, also said there was not enough time to hear Nero’s evidence and began to pack his bags.

Both defence counsels told the court that they had no interest in watching two one-hour DVDs relating to the case.

Chief Magistrate, Rechanne Browne-Matthias, who is presiding, commented that the case has been going for some time, noting also that it had come from “elsewhere”, an apparent reference to the coroner’s inquest that led to the charges being laid against the accused — in November 2015.

After some consultation with the defence and prosecution, the court decided that the preliminary inquiry will continue on Wednesday.

The students died when the privately-owned minibus that transported them to school careened down a steep section of the road and crashed into the sea at Rock Gutter, an uninhabited area between Fancy and Owia.

The bodies of Stay and Ballantyne were not recovered.

Nanton and Myers, along with Colbert Bowens, a school principal, were charged on Nov. 11, 2015 in connection with the death of seven students.

However, when the preliminary inquiry began on May 4, 2016, the prosecution indicated that the Crown was not proceeding against Bowens.