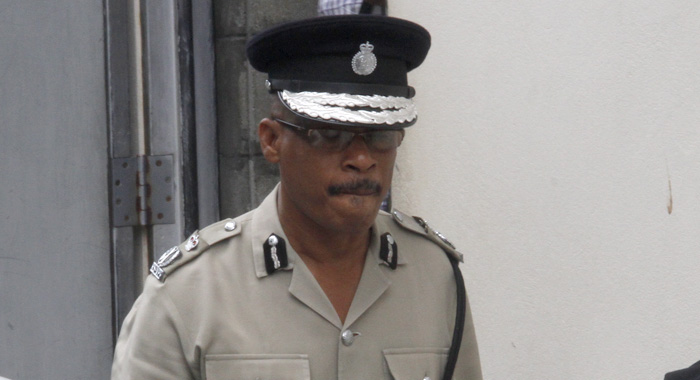 Commissioner of Police, Renold Hadaway, remained calm and collected during almost two hours of cross-examination in a case relating to a cache of guns that he displayed at a press conference in January.

He would, however, admit that he had cited an incorrect number as the serial number of one of the weapons, saying that he had done so having been misinformed by a sergeant who is also a weapons expert.

Lowmans Hill residents Randy Shallow and Freikesha Douglas are being tried on several counts of gun and ammunition possession in connection with a cache allegedly netted by police during a raid at Lowmans on Jan. 18. 2017.

They have charged the couple with possession of firearms and ammunition in connection with the find.

The accused are being represented by Grant Connell in the case that is being tried before Chief Magistrate Rechanne Browne-Matthias.

Hadaway, a firearms expert, was one of two persons who gave evidence when the trial got underway at the Serious Offences Court in Kingstown on Monday.

The police chief told the court that he is a weapons and ballistics expert with significant training in the United States and the Caribbean region.

He said that on Jan. 18, 2017, he received information that the police had seized some firearms and ammunition and other items in a raid at Lowmans Bay and that two persons were in custody in respect of the find.

As a result, Hadaway told the Court he had a conversation with the arresting officer, detective Police Constable Philbert Chambers, who subsequently brought the weapons and firearms to Police Headquarters in Kingstown.

Hadaway said he made this request of Chambers as he (Hadaway) was about to hold a press conference about the seizure.

He said Chambers handed over to him a number of exhibits, including a sub machine gun, serial number S29343, one .38 revolver and one Glock pistol. The serial number on the other two firearms cannot be easily identified, Hadaway said.

He told the court that the firearms had the initials “JC” and “PC” affixed to them.

Three magazines were also handed over to him, including one belonging to an AK47 rifle, Hadaway said, adding that these exhibits also had  “JC” and “PC” affixed to them.

Hadaway told the court that he displayed the items at the press conference and at the completion of the media briefing, the exhibits were returned to Chambers, who was standing outside the conference room.

The police chief said he later affixed his own initials to the weapons and magazines and signed the exhibits tabs.

During cross-examination, Hadaway said he summoned Chambers around midday but didn’t make a note of his time of arrival, adding that this does not have to be recorded.

He said he held the press conference because the seizure was substantial in terms of the number of firearms and ammunition found.

The police chief also said that at the time of the press conference he knew that two persons were in custody as part of the police investigation, but did not know their identities.

The police chief said it was not true, as Connell had put it to him, that Sergeant Jules Morgan, who was also involved in the raid, threw out the ammunition on the table at the police conference room ahead of the press conference.

Hadaway maintained that it was PC Chambers who had handed over the exhibits to him.

The commissioner said the evidence tags were removed from the exhibits just before the press conference to protect the integrity of the parties and the investigation and were replaced after being handed back to Chambers.

The police chief also denied that he was advised by anyone to hold the press conference.

Hadaway, who is also a lawyer, told Connell, that he does not agree with the defence counsel that his actions at the press conference were unethical.

He said he placed his initials on the weapons later that same day at the Office of the Commissioner of Police having summoned Chambers to bring them for that purpose.

Hadaway said this was done in the presence of Chambers.

At the end of Hadaway’s testimony, prosecutor Adolphus Delplesche, a former police officer told the police chief it was good to see him.

Delplesche said not many police chiefs would come to court to give evidence and told the commissioner that he had done well.