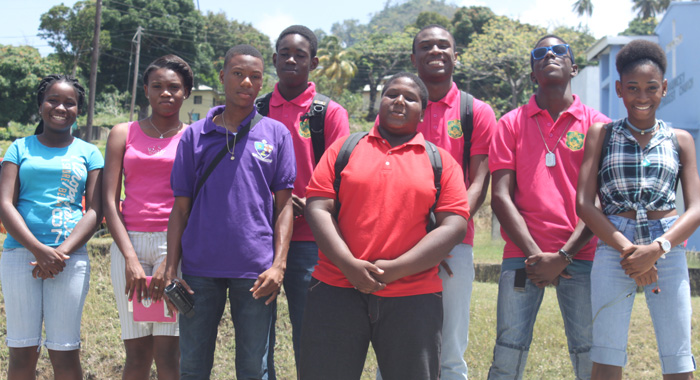 The SVGS Young Leaders, as part of their 2017 project, “I am WE; Volunteering for IMPACT”, partnered with the Chauncey Youth Fellowship (CMCYF) to particulate in several activities.

These activities included: visiting the pre-schoolers at Jayley’s Natural Care Pre-school in Chauncey, and taking out Yanick Charles, a paralysed young man who is also a member of the CMCYF, on an outing to Russell’s Cinema. The young leaders’ final activity with the CMCYF, was visiting the sick and shut-ins within the community.

During their April 5 visit to Jayley’s Natural Care Pre-school, members of both groups read and illustrated a series of stories and nursery rhymes to the toddlers.

On April 7, they went to Russell’s Cinema in Kingstown along with Charles and five members of the CMCYF and watched the movie, “Smurfs: The Lost Village.”

The Young Leaders felt accomplished as the event had the positive impact on Charles that they had hoped it would have had. The activity was a very fulfilling one, especially for Charles, who described the experience as having a “great impact” on him and expressed wishes to return.

In 2010, Charles, then a 12-year-old student the St Martin’s Secondary School, became paralysed from the waist down when he fell from a mango tree.

The first home they visited was that of retired principal of the Clare Valley Primary School, Germaine Stephens.

During the visit, they sang choruses and engaging in a little chat with Stephens, who reminisced about her days as a member of the Soroptomist International Women’s Organisation.

The young leaders also visited the home of Cadman Charles, a visually impaired former employee of the CWSA.

There, they also sang a series of choruses and hymns, after which Charles expressed his passion for singing gospel songs and proceeded to serenade his visitors.

Lastly, the young leaders visited the home of Inez Ashton, an elderly woman who suffers from Alzheimer’s. Again, they sang their usual set of hymns and choruses then closed with a prayer.

During the visits, each shut-in was presented with a fruit basket.

These visits were planned and carried out to ensure that the sick and shut-in members of the community, especially the elders, are not forgotten, the young leaders ay.

“It is essential that Vincentians, especially the younger generation, are enlightened on the importance of these members, as they have contributed tremendously to our community. We are strengthening and building on the foundation that they have established, so let us not forget them but instead uphold them,” they said.