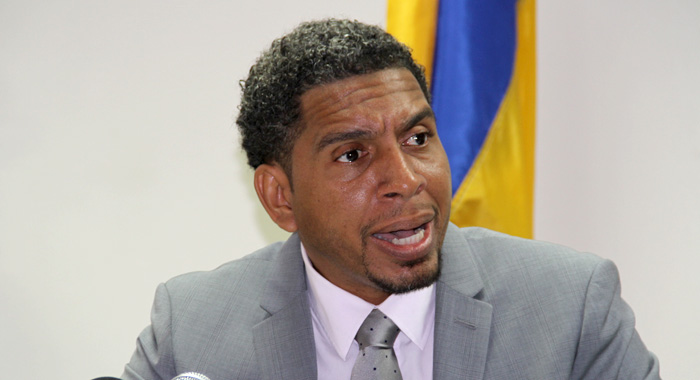 Former model Yugge Farrell has alleged that she had a relationship with Minister of Finance, Camillo Gonsalves, seen here in this May 1, 2017 iWN photo.

The main opposition New Democratic Party (NDP) has been accused of changing, midstream, its arguments about the financial statements of the state-owned International Airport Development Company (IADC).

Minister of Information, Camillo Gonsalves, told a press conference in Kingstown on Friday that the NDP’s original argument was not that the documents should be laid in Parliament, but that they did not exist.

“That is a belated argument after the fact, seeking a justification for the original point that was made,” he said.

In a press statement on April 19, Leader of the Opposition, Godwin Friday, said that the IADC’s financial statements should be laid in Parliament.

“The IADC was established in 2004. Today, 13 years later, not a single audited financial statement of the IADC has been brought to the House of Parliament by the Minister of Finance,” Friday said, adding that such a situation was illegal.

The government, however, has said that Friday is wrong and that the IADC’s financial statements should be lodged at the Commercial and Intellectual Property Office (CIPO).

The government has further said that the financials for the years 2004 to 2013 are at CIPO’s office and can be inspected there by any member of the public.

“I had somebody go to CIPO, not me, because I didn’t want anybody to say, well yes, Camillo Gonsalves, could get it, because he is a minister. So I had a non-minister go to CIPO and ask for the audited financial statements of the IADC,” Gonsalves told the press conference.

However, when iWitness News visited later on Friday, we were told that we could not get copies of the accounts for 2011, 2012 and 2013 because they were “unregistered” documents.

CIPO received the financials for those years on Dec. 8, 2015.

He said the opposition leader would know that the IADC is not a statutory body because statutory bodies are created in Parliament.

He noted that Friday has been a parliamentarian for the entire duration of the creation of the airport.

“So, unless he was not paying attention in Parliament, or unless he was so focused on potholes in Paget Farm that he was concerned with matters of national concern, he would have known that the International IADC was not a statutory body,” Gonsalves said.

He said that if Friday were making a point about the documents being in Parliament, he would have said that he knows they are at CIPO but that he thinks they should be in Parliament.

“But he never mentioned their existence. He said that they did not exist. And he implied in that way that the Government of St. Vincent and the Grenadines, or Dr. Rudy Matthias — I don’t know who — was being corrupt.

“That word has been floating around on the margins of this conversation — at the very least, not being accountable to the people of St. Vincent and the Grenadines.”

Matthias has been chief executive officer of the IADC since its formation.

Regarding the contents of the financial statements, Gonsalves said:

“I am not a financial controller. Some of these things make every little sense to me when I read them. But do not say that they do not exist. And do not say that you do not have access to them because you did, I did, and every other Vincentian had access to these documents.”

Gonsalves said that throughout the “attacks” on the IADC, the line run by the opposition has been that the government cannot pay for the airport.

Gonsalves said a conversation about the quality of the financial statements — if the opposition leader wants to have one — is good for the nation’s democracy.

“If he wants to have his own people look at these documents, by all means, look at them. Let us debate and discuss them. That is good for our democracy, and I will support that because I think that, as St. Clair Leacock, the member for Central Kingstown said, it’s been miraculous the way in which that airport was built and constructed and I think these documents will bear that out.”

Gonsalves said he would hope that Friday would be accountable to the people of SVG for the truth, at least, and that he would say that he erred in saying that the IADC is a statutory body.