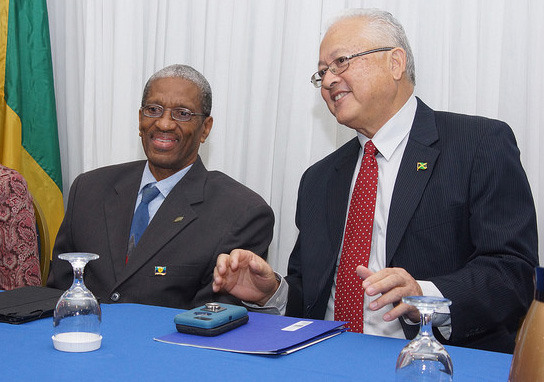 Parliamentarians from across the region gathered in Jamaica on Tuesday for a two-day conference focusing on halting the HIV/AIDS epidemic across the Caribbean region.

The conference, organised by the Pan Caribbean Partnership against HIV and AIDS (PANCAP), in collaboration with the United Nations Development Programme (UNDP), saw over 40 parliamentarians meeting to discuss the role of lawmakers in contributing to the ending of the HIV/AIDS epidemic.

The parliamentarians focussed on several issues including the United Nations (UN) political declaration on ending the AIDS epidemic by 2030 and the UN Sustainable Development Goal of ensuring healthy lives and promoting the well-being of all ages.

Dr. Douglas Slater, assistant secretary-general, Human and Social Development, CARICOM Secretariat, said a regional approach in combating the AIDS epidemic is necessary, given the enormity of the challenges for any Caribbean country.

Slater noted that a consensus on a regional approach to combating the epidemic in needed and greater collaboration will position key stakeholders to continue to accelerate the human development agenda.

Addressing the issue of legislative reform across member states of the Caribbean Community, Slater cautioned that the region has made very little progress in legal reforms for key populations.

“I challenge you to focus on reforms to eliminate the stigma for all, including the LGBTI community … As parliamentarians you have the responsibility to represent the human rights of all sectors,” Slater said.

Jamaica’s Minister of Justice, Delroy Chuck, said the forum sends a profound message that the region is committed to the ending of the epidemic, while noting that parliamentarians should engage in more advocacy for People Living with and Affected by HIV and AIDS at the policymaking level.

“We, the parliamentarians, need to act as advocates for people affected by HIV, we need to engage with all stakeholders, including the faith-based organisations to rethink some of the beliefs that isolate the key populations which are most affected by HIV transmission as we have an obligation to lead the way in protecting the weak and vulnerable,” the minister noted.

Meanwhile, St. Vincent’s Deputy Speaker of the House of Assembly, Sen. Carlos James, who attended the parliamentary forum, noted that the agenda focused primarily on accelerating policies and programmes towards HIV/AID-related elimination of stigma and discrimination in keeping with the international principles of human rights and the UN Political Declaration on ending the AIDS epidemic by 2030.

James said that key prevention strategies, through legal and policy reforms, can contribute to the significant reduction, if not the ending, of the HIV/AIDS epidemic in the region.

“The forum was a welcomed initiative and it strengthens the policy agenda for us to work from in terms of putting forward a regional legal framework to address the challenges in combating HIV/AIDS across member states,” James said

“Some of the studies are indeed alarming, we have cases where one in three of our youth population are inadequately informed about prevention methods and it is a clear indication that in some countries we must strengthen the awareness,” James said.

The grouping of legislators also addressed keys issues regarding the promotion of peaceful and inclusive societies for sustainable development and the provision of access to justice for all through the building of effective, accountable and inclusive institutions at all levels.

The meeting was also attended by Parliamentary Secretary in the Ministry of Education, Sen. Deborah Charles, Sen. Jules Ferdinand, Daniel Cummings, Member of Parliament for West Kingstown, and Winfield Tannis-Abbott, secretary of the Caribbean Regional Network of People Living with.