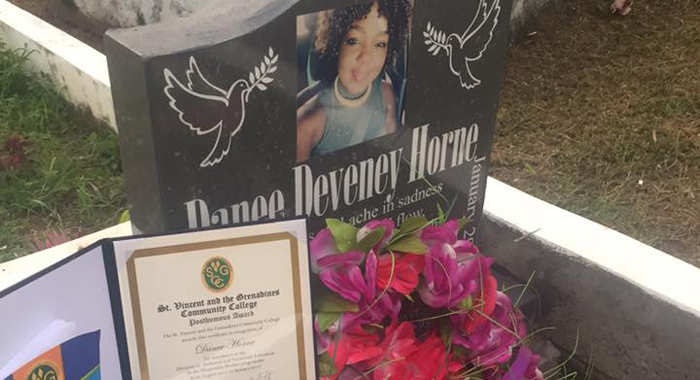 The four St. Vincent and the Grenadines Community College students who died in car accidents during the last school year were given certificates of attendance posthumously when the institution held its graduation ceremony on Wednesday.

Onixcy Hamilton, 19, of Troumaca, died on Dec. 31, 2016 when the car he was driving crashed in Chateaubelair.

On Jan. 29, 2017, three students died in a car crash in Barbados, on the morning that they were to return to St. Vincent after completing a weeks-long internship as part of requirements for their hospitality programme at the Technical Division of the college.

The students are Aziza Dennie, 19, of Redemption Sharpes, Daneé Deverey Horne, 18, of Questelles, and Carianne Lebrara Padmore, 18, of New Prospect.

Director of the Community College, Nigel Scott told iWitness News on Wednesday that giving the students certificates of attendance posthumously “was a way of recognising the students.

“It was a very sad period in the life of the college. We have never lost four final year students in one academic year. In fact, in the space of 30 days; so, it was a way of recognising and remembering those students,” Scott said.

He told iWitness News that the college hopes that the gesture helps the parents, classmates and other persons who are grieving.

“All parents look forward to graduation day and that was not going to happen. Typically, I don’t think these parents would have attended this graduation ceremony so we want [to provide] them with some closure as well,” he further said.

The parents of all of the female students attended the ceremony, while Maxwell Fergus, dean of the Division of Arts Science and General Studies, accepted the certificate on behalf of Hamilton’s parents.

Robertson has been paralysed with very limited movement in her arms and hands since was struck by a stray bullet in October 2010.

She was a Form 4 student and star athlete at the Petit Bordel Secondary School at the time of the shooting.

In 2011, she passed four of the five CXC O’Level subjects that she sat and received a Grade 1 in mathematics.

Scott said that Robertson is the second student who used a wheelchair that graduated from the college in recent years.

He said that Robertson, who lives in Chateaubelair, “is a very determined young lady”.

“She pursued a CAPE (Caribbean Advance Proficiency Education) programme in literatures in English and sociology, along with communication studies.

“… and she did it entirely from her wheelchair coming every day to class — just about — and having to have somebody write for her. It is a tremendous achievement really for Sweet-I to be able to do that,” Scott said.

In December 2013, then 23-year-old Shelton Hooper was sentenced to five years’ imprisonment for wounding Robertson.

Shelton and his brother, Sheldon Hooper, then 28, along with their cousin, Roland, then 26, were each sentenced to 12 years imprisonment for the attempted murder of LesroyDeGrads.

Shelton was also sentenced to five years hard labour on two charges of possession of a firearm with intent and unlawful use of firearm.

Scott told iWitness News that the lessons to be learnt from Robertson’s graduation and that of the classmates of the students who died tragically in the last school year are “the value of perseverance, staying focused, not losing sight of what your goal is”.

Some 760 students graduated from the four divisions of the community college on Wednesday.