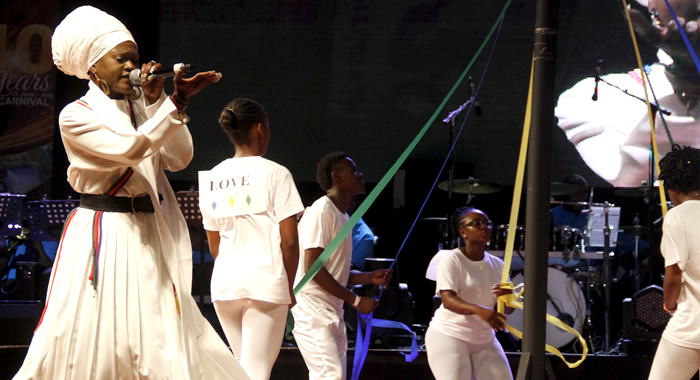 When the defending monarch, Zangie “Man Zangie” Adams, completed his elaborate presentation during round one of the National Calypso Monarch competition on Sunday, some patrons to the front of the stage, many of them seasoned calypso fans, were convinced that it was going to be four-in-a-row for him.

He had begun his song “Enough. No more” with an actor screaming on stage and a mother pleading with detectives to allow her to see her murdered son.

In the meantime, there was the ringing of a bell just outside the barricades that separate patrons from the media well immediately in front of the stage as Man Zangie shouted, “Sleepers, awake!”

As the music began playing, the back vocalists intoned the distinctive hum associated with worship within the Spiritual Baptist faith.

Zangie then marched on to the stage via a flight of stairs, dressed in a Spiritual Baptist outfit.

The theme of his song was that there was “enough of the senseless killing/flowers-bringing/It’s time to save our land from death and destruction”.

His plea was for “peace in my land” and he begged, “Grim Reaper, leave my country alone”.

The presentation included funeral home workers wheeling on stage a casket draped in the national flag.

A banner on stage throughout the presentation had handwritten on it Matthew 5:9 — “Blessed are the peacemakers, for they will be called children of God.”

After his elaborate presentation, Man Zangie exited the stage in much the same way he came, ringing a bell as he walked back into the crowd, saying, “Ah giving out message”.

He was referring to a practice within the Spiritual Baptist faith in which practitioners ring bells to get the attention of people as they tell forth their visions, prophesies and other spiritual revelations.

After Man Zangie came Glenford “Azarrah” Charles — who sang in position number eight among the 11 finalists — to sing “Fifty Years”, a song in tribute to Starlift Steel Orchestra, which is celebrating its 50th anniversary.

One media worker commented that if one needed to do research on the orchestra, they only needed to listen to that song.

“Providing that the facts are correct,” came the sceptical response — considered healthy in media work.

Not many persons considered Azarrah a serious contender for the crown.

Competitor number nine was Lornette “Fya Empress” Nedd who, like Man Zangie, was no stranger to the calypso throne.

And, interestingly, she also came on stage ringing a bell and dressed in a Spiritual Baptist-themed outfit.

Her song was “Hope is Alive” and she urged, “Hold on St. Vincent/ There’s a brighter tomorrow”.

Her prop was simple: a group of maypole dancers. Her voice was crisp and clear, her diction exact, and the music was such that it caused you to sway, even if you hadn’t intended to.

With presentation only worth 10 points, iWitness News was convinced, unlike some patrons, that Zangie’s bid to reign for a fourth consecutive year was under serious threat.

We told all our Facebook followers so, although among the two bards who were yet to sing was Robert “Patches” King, who had placed second behind Zangie for three consecutive years.

And with Kenneth “Vibrating Scakes” Alleyne having fumbled his lines at least twice as he sang “Forty Years”, the other leading contenders in the first round were Glenroy “Sulle” Caesar and Joanna Christopher, the first seasoned veteran of some 30 years’ experience and the other a debutant in the competition who made it all the way to the finals.

Sulle gave another presentation that was just vintage Sulle as he sang “More Carnival”. In keeping with its theme, the song seemed to have no breaks as he transitioned from verse to chorus and the music of drummers and pannists augmented that of the Royal St. Vincent and the Grenadines Police Force Band.

By the time the second round of the competition came around, it would be clear to those who paid more attention to what the artiste sang rather than the theatrics that accompanied their song that Fya Empress had put more space between herself and Man Zangie.

His second song, “Happy Anniversary”, was a very upbeat celebration of the 40th anniversary of Vincy Mas as a summer festival. Its presentation also included an appearance on stage of Nina Maloney, a member of the carnival committee that made the change, 40 years ago, to move the festival from the pre-Lenten to summer period.

Fya Empress, on the other hand, went for the bare minimum in terms of props when she sang “Guilty” in the second round.

In the song, the personal details how she chopped her husband to pieces when she found him in bed with another man.

When she sang the song in the national competition in Trinidad earlier this year, her props included a coffin, as if she was about to be executed for the crime.

However, in St. Vincent on Sunday, Fya Empress, dressed in a jumpsuit with “0007” on the back, was brought onstage in handcuffs by a uniformed police officer, who removed the cuff before she sang and replaced them after she completed her song.

The artiste’s presentation was far from impressive in the context of what Man Zangie had done, but what she lacked in that regard, she made up for with lyrics, which, at 30 points, was worth three times the value of presentation.

In the end, Fya Empress would dethrone Man Zangie, forcing him into second place, while Joanna Christopher would place third.

Christopher, who, before this year, had confined her talents to back vocals, won the heart of the nation, disgusted by the deep-rooted political divide but seemingly impotent to do anything about it, with her song, “Where All My Good Friend Gone”. The song spoke of how good friends, some whose friendships go back to childhood, allow politics and politicians to divide them.

Another debutant who made the finals was Shena Collis, who also stepped out from behind the back vocalists’ microphone and wooed fans with her silken voice, singing “Protect Yo Head”, a song about avoiding HIV/AIDS and other sexually transmitted infections, and “No More”, a song about breaking the silence associated with domestic abuse.

Sulle placed fourth, while Patches did not place with his songs “Unsung Heroes” and “Hallelujah” a song that exposed the “hypocrisy” of some religious denominations that are anti calypso, even as their own worship is akin to a disco.

This year’s finals had the highest possible male-female ratio with five females and six males. Among the female finalists was Cecile “Lil Bit” King, who is celebrating 25 years as a calypsonian.

Correction: An earlier version of this article said Patches placed fourth. It was acually Sulle who took that spot.