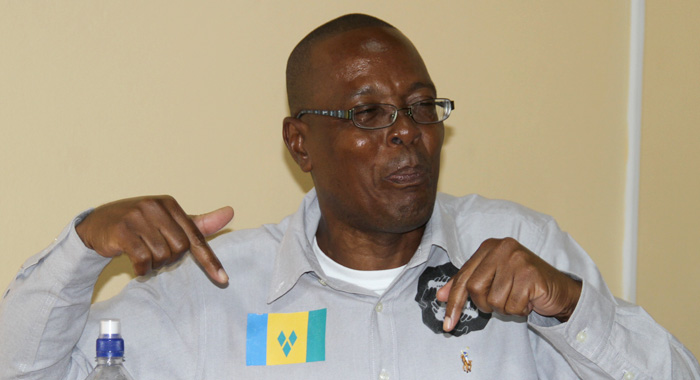 You are a young teacher employed by the state.

You choose a course of study and the Public Service Commission approves it.

You are granted leave to pursue the course of study, in this case, a degree in art.

You are bonded and you get sureties to guaranteed that you will return to St. Vincent and the Grenadines after completing the court of study, financed by a scholarship worth EC$175,000.

You go to Cuba and study for five years, return home and then the Public Service Commission, which approved his leave, which granted the scholarship, which told him you are going to study for a first degree, which bonded you, tell you, “Well, we don’t recognise your degree.”

This was the reality for a number of teachers, according to Otto Sam, the SVG Teachers’ Union’s industrial relations officer, at a union press conference in Kingstown on Tuesday.

“Sometimes, you can’t even vex; you simply have to laugh,” Sam said.

He said that in addition to the reality he outlined, for up to five years, the teachers have “engaged the ears” of the Accreditation Board.

“And the Accreditation Board writes to the Chief Personnel Officer and says this is the state that facilitated their (teachers’) training and now you cannot simply say to them you don’t know how to pay them, you don’t recognise their degree. At least organise for them to have training again so that they can upgrade but after six and seven years, the public service commission has done not a single thing in these sorts of cases. And people are still languishing…

“It almost amounts to the state conning its own citizens. And we as a union find it objectionable. It is simply sad and needs to be corrected.”

Sam also spoke of a case in which the state is “so cruel, so unfair, so unreasonable”.

He said that a teacher who applied for 50 days leave and left with the Public Service Commission his contact numbers as the collective agreement demands.

The teacher, thinking that the leave is granted, proceeds on leave and remains in St. Vincent and the Grenadines.

“The Public Service Commission, sometime after, deducts that teacher’s salary up to $5,000 saying that they didn’t report for duty.”

The union representatives said that it had been the experience of the teacher and others that the paperwork approving the leave came sometime after, so it was not unusual for the teacher to assume that leave was granted.

“It is unreasonable; it is unfair. And noting that the civil service order allows for even if you have a few days extra leave for it to be counted off against future leave eligibility, then one understands how cruel and inhumane we have become as a society, as a state and the Teachers’ Union has serious concerns as it comes to these sorts of issues,” Sam said.