One criminal offers to explain why another shouldn’t be jailed 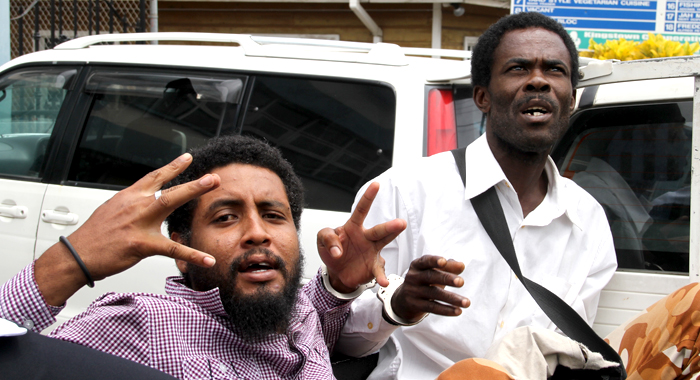 Anthony Goodluck, left, could not explain himself away from a jail term no one for Elton Williams, right. (iWN photo)

A Bequia man who during the trial of two other men said that he could explain how they came to be in possession of stolen goods, deemed a “small thing” the two-year jail term he received for his role the crime.

He was also charged that between July 15 and 29, 2017 at Port Elizabeth Bequia, he, knowing or believing two bottles of Gillette roll-on, one jar of Skippy peanut butter, one bottle of mayonnaise, one bar of Caro White soap, one pair of red and white Jordan slippers to be stolen, dishonestly received same for his own benefit.

He pleaded guilty to both charges when he appeared before Magistrate Bertie Pompey at the Kingstown Magistrate’s Court on Monday.

The crime was reported to the police, who recovered a few of the stolen items from a number of persons on the northern Grenadine island.

These persons were charged and the investigation also led to Goodluck, who was charged with burglary and handling stolen goods.

Goodluck told the court that he had gotten the items from “a brethren” who was putting them in a garbage bin.

The “brethren” told him that he had stolen the items, Goodluck further told the court, adding that he did not know from whom the items were stolen.

Goodluck said that the police investigation revealed that the items had been stolen from his own relatives, causing him to “feel so small”.

He told the court he was willing to pay for his part in the crime, adding that he had distributed some of the stolen items to other persons.

Pompey, before sentencing the man, commented, “When I look at you, you look like someone highly respectable but that is far from the truth.”

Goodluck responded, telling that magistrate that he is, in fact, a respectable person.

“So what I have before me here,” he said in reference to Goodluck’s criminal record.

The man was then sentenced to two years imprisonment.

He muttered, “small thing” as he exited the dock.

Earlier, during a separate trial, Elton Williams of Port Elizabeth, and Jesian McKenzie, of Union Level, Bequia, pleaded guilty to a joint charge of that they, knowing that one bottle of Olay lotion, one jar pf Jif peanut butter, one bottle of Dove roll-on, one Right Guard deodorant, one tube of Colgate toothpaste, one Gillette roll-on, one Dove spray, one Stripe peanut butter and jelly, one St. Ives cream, one Skippy peanut butter, one pair of grey and blue Jordan shoes, one pair of grey Jordan shoes, one foot of grey and black Jordan shoes to be stolen, dishonestly received the same for their benefit.

The court heard that the police were investigating the burglary at the business place when they received information that led to Williams, who was arrested.

Williams denied committing the burglary but admitted to having the stolen items in his possession.

He was charged and further investigations led to McKenzie, who said he bought some of the stolen items from Williams and handed over those in his possession to the police.

McKenzie told the court that he has been working for six days a week for seven years for the same establishment, the Old Hegg Turtle Sanctuary in Bequia.

He further told the court that ordinarily he would not have bought the items, but Williams woke him out of his sleep one early morning and in his stupor, he agreed to the purchase.

McKenzie, the youngest of the three men charged in connection with the burglary, said that he was not thinking straight at the time and asked the court to impose a fine on him, noting that he was a first-time offender.

McKenzie was ordered to pay the court EC$400 forthwith or spend three months in prison.

He paid the fine.

Williams was also slapped with the same burglary charge as Goodluck, but this was withdrawn after he pleaded guilty to handling stolen good charge.

For his part, Williams told the court that he did not steal the items.

“A friend gave it to me and say he get it from away (overseas). The other person is here,” Williams, said, as Goodluck, who was awaiting his arraignment, said, “I am here, my worship.”

Goodluck, however, was told to be quiet as he was not a part of the proceedings.

Returning to McKenzie, Magistrate Pompey said, “I am minded to give you a prison sentence. Your previous convictions show you are less than an honest person. Twenty-three convictions.”

But McKenzie continued to plead with the magistrate not to send him to prison.

“Why should I not send you to prison?” The magistrate said.”

“I will explain,” said Goodluck from the seating area for accused persons and prisoners.

McKenzie told the court that his convictions were in his “younger days”.

“In 2014, you were in your younger days,” the magistrate further commented, adding, “You’re really deserving of a prison sentence.”

Pompey, however, told the man to sit and allow him some time to consider what sentence he should hand down on him.

After hearing a number of other cases, including Goodluck’s, Pompey sentenced McKenzie to two years imprisonment.

He, however, later recalled the man to the dock, telling him that two years was the maximum for the crime and he had accorded him a discount sentence in light of his early guilty plea.

The sentence was then reduced to one year in prison.

As McKenzie, Goodluck and other convicted or accused persons waited in the court room to be transported to the prisons, the two men fretted with the court orderlies, asking them to take them to the prisons. At one point, they complained that the air conditioning in the courtroom was affecting them.

Goodluck further said that he was being bitten by bed bugs, which he claimed had infested his clothes while he was on remand.