Continued caution urged as all clear is given for SVG 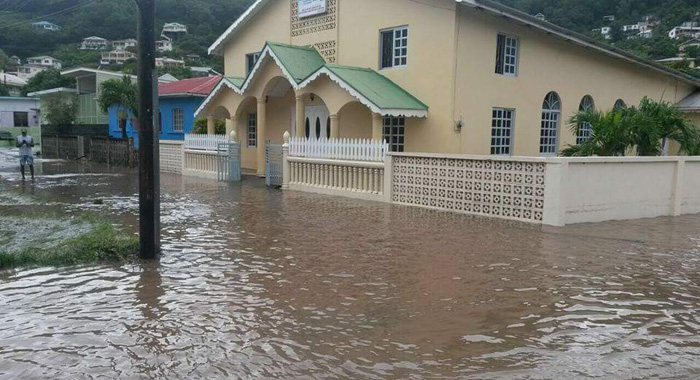 Bequia was among the areas worst affected by the storm. (Photo: Trinity Farrell)

The tropical storm warning for St. Vincent and the Grenadines was discontinued at 2 p.m. Friday and the all clear given for activities across the country.

“So all businesses can resume as normal and we expect persons to continue their normal activities,” Director of the National Emergency Management Organisation (NEMO), Michelle Forde said on NBC Radio.

She said that although the all clear has been given, the country can still expect periods of rain.

Forbes said the country experienced light to moderate rainfall with some pockets of heavy showers since the warning Tropical Storm Harvey came into effect Thursday afternoon.

“We have had reports from several areas that have been flooded today,” she said, mentioning Edinboro, Bequia, Mustique, Fancy, Owia, and Sandy Bay and Calliaqua, where two houses were damaged.

Forbes said that reports from Bequia suggest that there are some problems accessing Paget Farm and businesses and homes were flooded in Port Elizabeth, the main town on the northern Grenadine Islands.

She said that Sandy Bay and Bequia and especially Bequia, seem to have taken the brunt of the rainfall that fell on Friday.

The disaster management official said there are 15 persons in emergency shelters, adding that NEMO has started preliminary assessments in Edinboro and the Calliaqua-Belmont area, where one family of five is in an emergency shelter.

She said full assessment with the Ministries of Transport and Works, Housing, and National Mobilisation will begin on Saturday in Bequia and North Windward.

Forbes said that the Roads, Bridges and General Services Authority (BRAGSA) has reported landslides in Carapan, Belmont and South Wood and the BRAGSA team is already clearing the landslide in Belmont and will continue into Saturday.

Forbes urged persons to exercise caution on the roads because of debris and landslides.

She noted that the peak of the Hurricane Season is about to begin and that the season, so far, has been quite active.

“The new forecast from the Hurricane Centre is for it to be even more active. And if we have already been active and are going to be more active, you can just imagine what we have in store for the next couple months,” she said.

The Hurricane Season officially runs from June 1 to Nov. 30 and Forbes said NEMO is asking persons to continue to implement the necessary preparation for extreme weather events, whether it be strong winds or heavy rainfall association with tropical cyclones.

She urged residents to continue to listen to the weather forecasts and follow the advice given even outside of when there is a tropical weather system.

Meanwhile, Manager of the SVG Met Services, Billy Jeffers said that SVG can still expect some showers into Friday afternoon.

‘The showers that we are forecasting is to be on the light side,” he, however, said, adding that forecasters are expecting some periods of heavy rain and possibly isolated thunder storms as well.

“But not in the intensity that we had earlier, so that is good news for us,” Jeffers said.

He urged residents in areas prone to flooding and landslides to continue to exercise caution.

Jeffers said that there will be a gradual reduction in shower activity into Friday night.

“And by tomorrow, things should be pretty good on our end,” Jeffers said.

He said that forecasters expect seas to continue to be peaking up to about 10 feet, and urged sea bathers and small craft operators “to be on the safe side”.

He further reiterated that this is the traditional peak of the hurricane season and urged residents to listen to the updates from the Met Service.