PM suggests some cops to transfer to Public Service 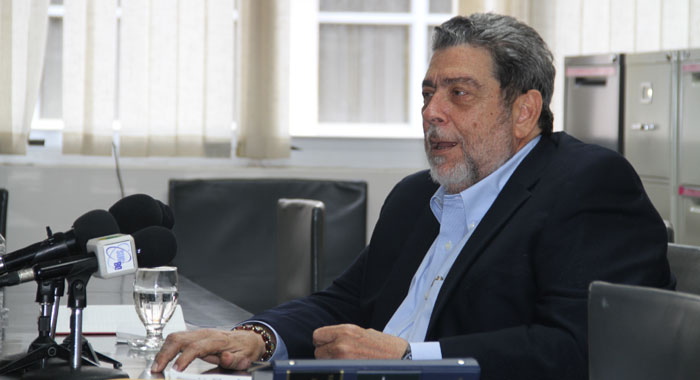 Prime Minister Ralph Gonsalves has criticised the way some police officers handle their duties and says that they should apply for a transfer to the Public Service if they do not want to be in law enforcement.

The comments by Gonsalves, who is also Minister of National Security, came at a press conference on Monday.

He said he had heard a lot of discussions about the incident on Saturday in which a van transporting young people to a picnic crashed in Diamond, reportedly as a result of speeding.

“The Police Force is one and indivisible. Not because there is a Traffic Department that traffic matters must only be dealt with only by traffic police,” he said.

“So if some people [are] coming out, driving from town going to South Rivers to enjoy our waters up there and the picnic scenery — and I am very happy to see we have this kind of internal tourism, but don’t mean that the minibus man them, because the young people them might be happy and laughing that you have to drive as though you are on the race track. Eh?

“Be what you are: a policeman! That’s what you are. That’s why there are — when we have 30 positions for police we have 150 candidates, 200,” Gonsalves said, adding that successful candidates are then trained.

He said if a police officer in Questelles stops a driver and the driver doesn’t have his licence, the officer does not tell the driver to take it Kingstown, an apparent reference to the Traffic Department.

“You are a police officer. You can demand that they bring the licence for you within so many days, as is required by the law.”

The prime minister said there are some police officers who, when they receive calls at the station, they take a message and their instinct is to the call the Rapid Response Unity (RRU).

“The RRU is called the Rapid Response Unit, not the routine response unit, the prime minister said.

The prime minister, who is also a lawyer, read from the law, noting that any member of the force has certain powers within the country and on vessels.

“So if you are on the beat and there is a tourist or a citizen or a resident, it doesn’t matter who, who is being assaulted, it’s your duty to get involved. You can’t stand back and don’t report it or anything of the sort. You have to be proactive,” he said.

The prime minister’s comments were in apparent reference to an incident in Kingstown in which an off duty/plainclothes police officer intercepted a robbery of a tourist in Kingstown.

However, the tourist left the country without reporting the incident, and reportedly was not assisted in doing so although a police officer witnessed the crime.

Rose Place resident Jervany Baptiste has been charged with robbing an unknown man of an unknown address of a bangle, in connection with that incident.

Gonsalves noted that the law says it is the duty of the Police Force to take lawful measures for 16 things, the last of which is “executing other duty as may, by law, be imposed on a member of the force”.

He, however, thanked the police saying that over the last few weeks they have been stretched, going all across the ground at all hours apprehending people and clamping down on crime.

“I want to thank them and I congratulate them. But for those who are still in a mode of lethargy, I’m saying to you, do your work as a policeman or policewoman and know that you are part of an integrated police force,” the prime minister said.