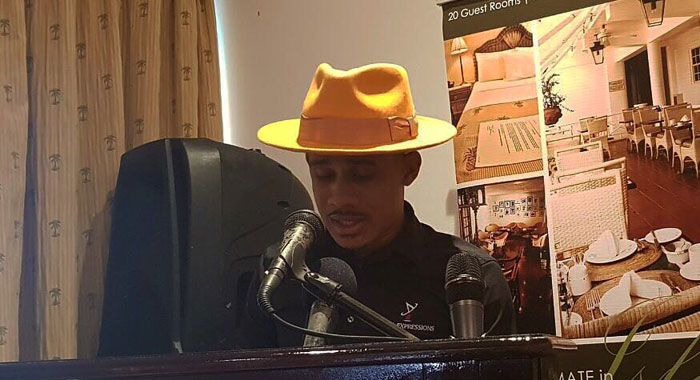 The annual event Steel Expressions concert will this year adopt the theme “International” as it embraces cultures from around the world.

Rodney Small, who developed the show and continues to be the headline act, is encouraging patrons to represent different nationalities in their attire as they will be taken through an international ethnic journey of music, food, and fashion.

Sandra “Singing Sandra DesVignes of Trinidad and Tobago will be the other headline act. There will also be an African performance and final arrangements for an act out of Cuba are being made.

The Dec. 30 event will include a wine and dine, where a variety of dishes from various cultures will be on sale.

Other new additions to the event include a Children’s zone where children will be given added entertainment through collaborations with Playtime by Uncle Skinny, Tus-T Water, and the No. 14 Rangers Company.

Former Minister of Culture and mentor of Small, Rene Baptiste told the launching in Kingstown on Monday that the creative arts should be given the respect it deserves.

Baptiste also commended the young pannist for his contribution to the art form and urged aspiring professionals to take their craft seriously.

Minister of Foreign Affairs, International Trade and Commerce, Sir. Louis Straker, emphasised that Small is a role model and inspiration to many young persons in this field.

He admonished persons not to settle for mediocrity in their endeavours.

Proceeds from the event will go towards childhood cancer, through the St. Vincent Medical Association; donations from previous shows were made to SCORCH and the School for Children with Special Needs.

Meanwhile, President of the SVG Medical Association, Dr. Rosalind Ambrose, expressed appreciation to Small and his team on this timely contribution.

She said the Medical Association is the first organisation locally to spread awareness of childhood cancers, in addition to their breast and prostate cancer awareness campaigns.

President of the SVG Amp, Orandi “Bomani” Charles, congratulated Small and his hard-working team on the fifth anniversary of Steel Expressions.

Gold Sponsor, Flow, donated a cheque of $10,000 to the event, $2000 of which will be given to Childhood Cancer through the St. Vincent Medical Association.