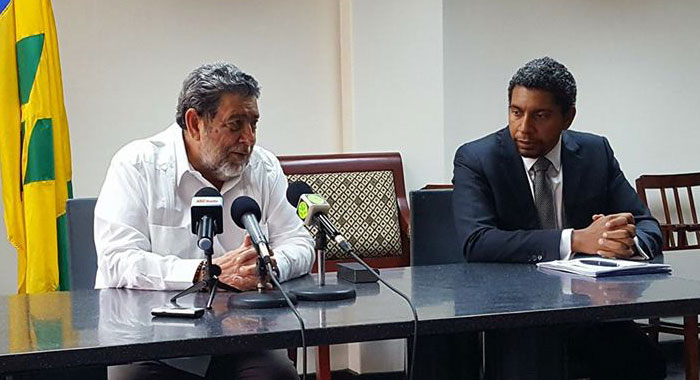 Minister of Finance Camillo Gonsalves has dismissed as “idle speculation” rumours that he is being positioned to succeed his father, Ralph Gonsalves, 71, as Prime Minister and leader of the Unity Labour Party.

The pre-existing speculations were further fuelled when the prime minister earlier this month handed over to Camillo, the finance ministry, which the older Gonsalves has held since his party came to office in 2001.

Camillo, 45, was previously a senator and minister of Foreign Affairs and was Minister of Economic Development before the finance portfolio was added to his responsibilities.

Responding to a question at a press conference on Tuesday about whether he is being positioned to succeed his father as leader of the ruling Unity Labour Party (ULP), Camillo said:

“The ULP has a leader. The leader is Ralph Gonsalves, and we are not a party that jostles for leadership. We have learned our lesson historically about jostling for leadership.”
Camillo said everyone in the ULP “is thrilled” with the senior Gonsalves’ leadership.

“… the people of St. Vincent and the Grenadines have repeatedly demonstrated that they are thrilled with the leadership of Ralph Gonsalves and there is no jostling, there is no anxiety by anybody in the ULP to remove or usurp or replace Ralph Gonsalves.”

The finance minister said the time for leadership transition in the ULP will be “at a timetable to be determined by the party in serious consultation with the prime minister; it won’t be determined by rumour”.

Camillo said this would be determined by the membership of the party, governed by the constitution and its processes.

“We don’t have those issues in our party and there is no anxiety about succeeding the prime minister. I hope he goes for as long as he sees fit. And I know that my opinion is not a minority opinion.”

Camillo said one has to remember that Gonsalves has been prime minister for 16 years.

“Look around the Caribbean over that 16-year period. Every other country in the Caribbean has changed government and most of them changed governments right around the time of the economic crisis that we experienced right across the region — 2008 and continuing. And I say again — because he has relinquished his position as finance minister and I will have a chance to speak about this more in the future, we are one of the few eastern Caribbean countries, through that financial crisis that did not have to go to the IMF to stay afloat, we are one of the few Caribbean countries that didn’t have problems during that time of people who can’t get their salary on time.”

He said Vincentians know what is happening in other countries because of the incredible constraints that the financial crisis imposed on them.

“We are one of the few countries in the eastern Caribbean, the only country in the OECS, that hasn’t had to resort to selling citizenship to stay afloat.”

Camillo said that is testimony to the prime minister’s “excellence not only as a finance minister … but to his leadership and the fact that he was able to lead this country through a very, very difficult economic time.

“Forget all the back and forth you have about politics, I talking big, umbrella issues here, there was a financial crisis that made, in large part, the governments change in Jamaica, Bahamas, Antigua, St. Kitts, St. Lucia, Antigua come down the line — Grenada, Trinidad and Tobago — there is Dominican as well. How did Ralph Gonsalves stay in government and keep his party in government through this difficult time. It is one of two things: Either he is a brilliant leader or the opposition is incompetent. Those are the two options — or some a combination of the two.”

Camillo said “we” are settled that Gonsalves is a “once-in-a-lifetime leader.

“Nobody is anxious to see him go and I think that the rumours that you are talking about is more idle speculation by opposition people who have been in opposition so long that they are worried about how much longer they will be in opposition,” he said.

The older Gonsalves, who has been a member of Parliament since 1994, has said he will not lead the ULP into another general election, but will continue as the party’s candidate for North Central Windward, which he has represented since he was elected to parliament.