‘I can provide the best leadership to the NDP’ — Leacock 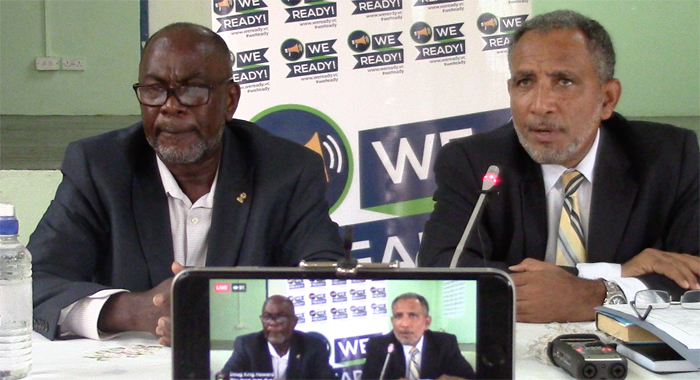 One year after he failed to emerge as leader of the main opposition New Democratic Party (NDP), Member of Parliament for Central Kingstown, St. Clair Leacock, says he believes he is the best person to lead the party at this time.

He made the comment on Boom FM on Monday, even as he acknowledged that the party can only have one leader at a time and the current leader is Godwin Friday.

In November 2016, Leacock stayed away from a meeting at which his six parliamentary colleagues elected Friday as Leader of the Opposition.

Member of Parliament for West Kingstown, Daniel Cummings, is said to have voted for himself, while the five other votes went to Friday.

With Friday elected as opposition leader, Cummings threw his support behind him for party leader, which was to be decided at a party convention that same month. Cummings also announced his candidacy for party chair, to which he was elected, unopposed.

Leacock, however, continued his bid for party leader until the very end, withdrawing just before a vote, and Friday became leader by acclamation.

He replaced Arnhim Eustace who had stepped down after 16 years in the post and eclipsed Leacock, who many persons had thought would have succeeded Eustace.

“I thought I had done enough to be the person to replace Mr. Eustace as the leader of the New Democratic Party,” Leacock said on Boom FM on Monday.

“If you ask me how I feel inside, I still feel, and I genuinely believe, I can provide the best leadership to the New Democratic Party going into an election campaign,” Leacock said.

He, however, noted the democratic process, saying, “But that has not been the choice of the people and I have to respect that democratic process and turn around and to be the consummate team member and I do all that I can, all that I have to the executive and Dr. Friday. I do nothing to undermine him and everything that I can support and uphold him.”

Political observers have criticised Leacock over what they have described as bitterness at losing the leadership race in the party.

In the month immediately after the leadership transition, his actions suggested that he had considered joining the ranks of the ruling Unity Labour Party, but Leacock has told iWitness News that he had never considered such a move.

Speaking on Boom FM on Monday, Leacock said: “You win some and you lose some. But I know what the challenge is. But I will not sit in a party that wants to form government and see people doing stupidness and performing well short of what is required to form government and say that is acceptable and after the election have another post mortem. Even now, we don’t know why we have done badly in some of the seats. We say yeah, they thief, they thief, they thief. Well the evidence is not there that there are serious irregularities in the campaign.”

His comment came within the context of criticisms launched against him on the weekend by social commentator Keith Joseph over Leacock’s public statements recently about senatorial appointments in the NDP.

Joseph said that Leacock is now the weakest link in the NDP and said that while the Central Kingstown MP has boasted about not being on anyone’s plantation, it is now clear whose plantation Leacock is on.

Leacock was the only NDP candidate to win by a larger margin and asked whether the party has done the type of analysis to determine why it lost.

Leacock suggested that he was being urged to have those discussions in-house.

“When does it happen in-house?” he said, adding that there is an executive meeting of the NDP Tuesday and the party might want to move against or bring actions against him.

“I not even going to waste my time to stand before a committee to defend myself. If they ask me to leave, I leave, so help me God, and I find something else to do with my time… Politics is not the be all and end all of life. I’m a simple person and an ordinary person.”

He said that some persons are holing up as achievements attendance at Soca Monarch and Gospel Fest, and parades.

“I’ve done those things for the last 50, 55 years as a matter of course,” said Leacock, who also pledged his commitment to the NDP.

“Dr. Friday has his work to do. I’m lending him my support but he has to do his own work. I’ve stayed away from radio so that he can emerge and put his own brand and stamp of authority, which he has a right to do and is entitled to do and I support him doing that,” Leacock said, referring to the months immediately after the leadership transition, during which he did not make his weekly appearance on the party’s radio programme on NICE Radio.

“I am not in a contest for the leadership of the New Democratic Party,” Leacock further said, adding that there can only be one leader of a political party at a time and it is Friday.