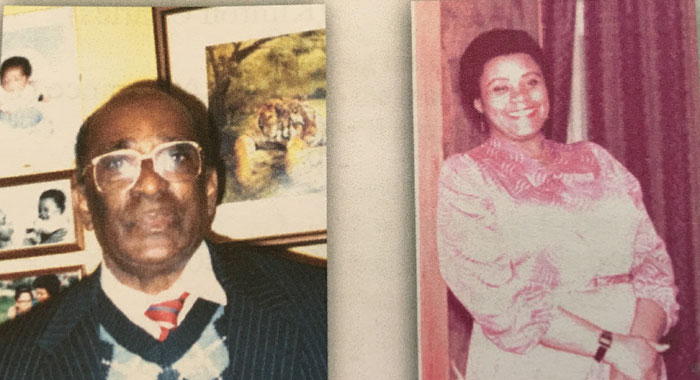 Death did not separate Ernest Harriott, 90, and his wife, Leitha Harriott, 72, for very long.

About 15 hours after Ernest died on Christmas Eve, his wife joined him on the other side, transitioning on Christmas Day.

At their funeral in Questelles last Sunday, Jan. 7, longstanding friend Romor Finch, better known as Raymond Finch of Vermont, chronicled the last week or so of the couple’s life.

Leitha was originally from Chauncey and her husband was a born Jamaican.

They met and got married in England, before retiring in St. Vincent.

Finch told mourners that on Dec. 17, 2017, Ernest was admitted to the Milton Cato Memorial Hospital at night

On Dec. 18, his wife was admitted to the same hospital late in the evening.

On Dec. 21, Leitha was discharged and sent home late in the evening.

Finch said that on Dec. 24, for a second consecutive day, he visited Ernest and took a late lunch for him at 4 p.m.

“While I was feeding him, drinking from a plastic bottle with a straw, he was almost finished. He started coughing, then he stopped and at that point, he became very calm, as if he had fallen asleep. A patient on the opposite side of the ward, said to me, ‘Check the nurse to see if he has fallen asleep.’

“This I did. The nurse came and said, ‘He is dead.’ The doctor came and confirmed that Ernie had died,” Finch told mourners.

He said he was not shocked, adding that Ernie had died “so peacefully”.

On Finch’s way home, he stopped at the now deceased couple’s home in Chauncey, to see Leitha and to communicate to her the sad news.

He met her lying on her back, hands and feet stretched out and her eyes looking towards the ceiling.

“I whispered to her, in her ear, I said, ‘Pappy passed.’ She did not respond.”

About 7 a.m. Christmas morning, the phone rang and Finch was informed that Leitha had died.

“I saw Leitha lying in the bed in the same position as I had left her the previous day,” he said of the deceased woman.

He said they both died “calm, peacefully; just like that.

“We thank God for Ernie and Leitha’s long and peaceful life and we ask God to bless his or her family who mourn their passing. May their souls rest in peace,” Finch said in his tribute.

Another mourner, who gave her name only as Mary, said she had known Leitha all her years and she was the grandmother of her first daughter.

For more than 50 years they have been close friends and never, never exchanged a harsh word. Their children grew up like siblings, Mary told mourners at the Questelles Seventh-day Adventist Church.

Mary said she was as at her dinner table praying for the woman and her family when she received the news that Leitha had died.

“Leitha was a good friend to me,” Mary said, adding that after the woman migrated she would send her (Mary) money when she least expected, but often when she needed it most.

The couple was buried at the Chauncey Cemetery.

Undertakers told iWitness News that their only regret in providing the final service was that because of the couple’s physique they could not place them together in an oversized casket.