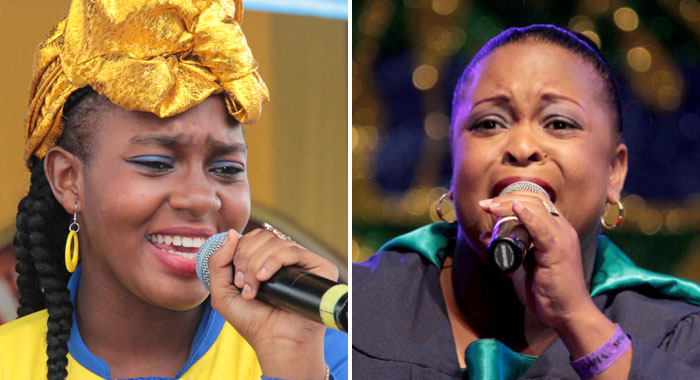 Singing Kristy, right, and Shaunelle McKenzie, who have dominated the junior calypso competition during their eras, are both seeking to win their first Queen of Calypso crown. (iWN photo)

The competition has been revived, after 15 years, and organisers are promising an exciting show at the Russell’s Auditorium, beginning at 8 p.m.

The show will be held under the auspices of the St. Vincent and the Grenadines Calypsonians Association.

President of the association, Earl “Caba” Bennett, told iWitness News that patrons can expect an exciting show that features veterans, relatively-experienced calypsonians, and others who are new to the art form.

Cecile “Lil Bit” King, of Upstage Xperience Calypso tent, will attempt to win the crown again with her song, “Different from the Start”.

Lil Bit won the competition in 1995 with “Hero’s Message”.

She will share the stage with Shaunelle Mc Kenzie, also of Upstage, who has won the Junior Calypso competition eight times, although a senior crown continues to elude her.

Mc Kenzie is hoping to change that with her song “Life isn’t Fair”, when she appears in position number 4.

Another monarch that will grace the stage tonight is West St. George Secondary School student, M’riah “Young Saiah” Robertson, who won the junior soca monarch on her first attempt last year with the song, “Carnival Hot”.

Tonight, Young Saiah, is hoping for a repeat of last year’s success with her song, “Minivan Lovers” — in position number 9.

The show will feature two songstresses who made it all the way to the finals of the national competition at their first attempt in 2017.

They are Shena Collis and Joeana “Nubian Princess” Christopher — who placed third in the national competition.

Shena and Nubian Princess are also members of Upstage, which has eight persons among the 15 finalists, twice the number of the Graduates, which has the second-highest number of finalists: 4.

The 15 artistes were selected from among 20 who auditioned to be in the finals.

The full list of competitors, the names of their songs and the positions in which they will appear is published below.