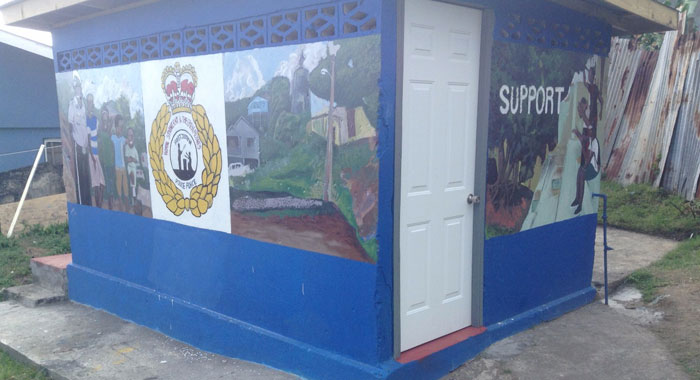 During Police Week of Activities 2018, members of the Royal St. Vincent and the Grenadines Police Force in collaboration with members of the business community implemented several community outreach projects, with a view to forging a closer relationship with the public.

One of the projects that were executed was the renovation of the community bath in Redemption Sharpes, which was in a state of disrepair.

With the help of a few generous friends from the business community, the officers attached to the Police Carpenter Shop along with prisoners at Her Majesty’s Prison and other members of the Sharpes community repaired the community bath.

The roof was fitted with new galvanize sheets, the interior walls of the bath were power-washed, painted and tiled. A double sink was constructed on the outside for the wash of clothing.

The exterior walls of the bath were painted with mural paintings to beautify and improve the esthetic of the area.

On Sunday, the Commissioner of Police Colin John will hand over the refurbished community bath back to the community at during an officially scheduled to commence at 4:30 p.m.

Prior to the official handing over ceremony, there will be a football match between a Commissioner of Police 11 versus a Sharpes 11 as the lawmen and the residents of Sharpes engage in sporting rivalry, all in the name of peace, cooperation and partnership.

“This community project in “Sharpes” and Police Week 2018 would not have seen the tremendous level of success it was without the cooperation and assistance of members of the general public.

“Accordingly, as Commissioner of Police, I wish on the behalf of the Police Force to sincerely thank the undermentioned persons, businesses and organisations who went above and beyond the call of duty to ensure that Police Week achieved its many objectives:

The Royal St. Vincent and the Grenadines Police Force Band will be in concert before and after the events.

The public is invited to attend the events.