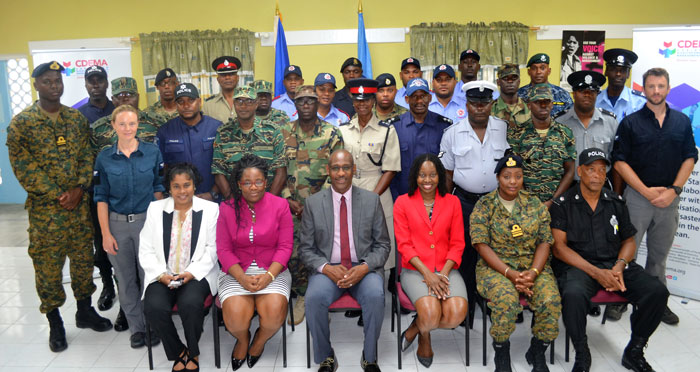 The training workshop is taking place from July 16 – 20 in Barbados with funding support from the United States Government through the U.S. Southern Command.

A first batch consisting 33 members of the CDRU was trained in Antigua and Barbuda in May, taking into account a range of recommendations from the After Action Review conducted on the Hurricanes of September last year.

To this end, the CDRU training programme was revised to include modified course content, expanded exercising components and more robust deployment arrangements. By the end of this workshop, an additional 30 members will be trained as the region’s primary disaster response Unit for the CDEMA Participating States.

“If there is one thing that we can be sure of, it is that given the high level of vulnerability of our region there will always be a need to respond”, said Elizabeth Riley, Deputy Executive Director of CDEMA.

“In 2017 for the first time, two CDRU teams were requested in one year. The timing of these deployments overlapped and in both cases the requesting governments found such value in the work of the CDRU that extensions were requested to the normal two weeks. Over the years, with every event, we have learned and improved,” she said.

The CDRU comprises military, fire and police assets drawn from the 18 CDEMA Participating States. The unit is deployed to provide humanitarian assistance in direct support to the civil authorities of any CDEMA State impacted by natural or technological hazards.

Its main tasks include the management of relief supplies, emergency telecommunications and the provision of appropriate personnel for repairing critical lifeline facilities.

The CDRU is one of the key response teams of the Regional Response Mechanism (RRM). For the eight-year period 2010 – 2017 the RRM has been activated on eight occasions and on four of these occasions, the CDRU was deployed, three times as a result of hurricane impact and once in response to earthquake — Haiti in 2010.

The participants will be oriented on a range of areas including the Regional Response Mechanism, CDRU operations, emergency communications, relief and warehouse management, psychosocial first aid and dignity and human rights.

The training will culminate on Friday with a field training simulation exercise where the team will exercise the phases of the CDRU operations including alert, activation, mobilization, conduct operations, withdrawal and stand down.

The CDRU is activated, mobilised and deployed by the Regional Security System’s Central Liaison Office (RSS/CLO) in consultation with and on behalf of CDEMA.

Its operations are guided by the CDRU Operational Plan, Standing Operating Procedures and a Memorandum of Understanding between CDEMA and the RSS.