Man admits to kicking child but maintains not guilty plea 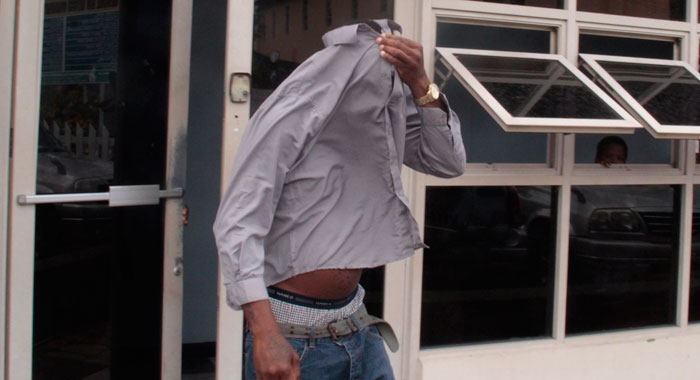 The defendant, Orlando Lowman uses his shirt to hide his face as he leaves the Kingstown Magistrate’s Court. (iWN photo)

A Rockies man who repeatedly admitted to the Kingstown Magistrate’s Court that he kicked a minor in his chest resulting in his hospitalisation, has been granted an adjournment in his trial to allow him to call witnesses in his defence.

Orlando Lowman, a sailor, maintained his not guilty plea on July 16 during his trial at the Kingstown Magistrate’s Court, after Senior Magistrate Rickie Burnett explained to him the legal principle of “transferred malice” and asked him if he wanted the charge to be put to him again.

Transferred malice is a legal doctrine that holds that, when the intention to harm one individual inadvertently causes a second person to be hurt instead, the perpetrator is still held responsible, Wikipedia says.

The magistrate’s intervention came after the defendant told the virtual complainant, a 12-year-old boy, during cross-examination, “It wasn’t meant for you. It was an accident and I am sorry.”

The boy told the court that he was at his friend’s house watching television on Nov. 10, 2017 when the defendant attempted to stomp the virtual complainant’s friend.

However, the blows landed in the virtual complainant’s, resulting in him being hospitalised at the Milton Cato Memorial Hospital.

The boy said that the kicks were in quick succession. He told the court that he had held his chest after the first stomp and was unable to say anything before he was struck again.

During cross-examination, Lowman told the court that the virtual complainant is his friend and that he had intended him no harm.

He, however, said that the person for whom the kicks were intended picked up the boy and used him as a veritable human shield.

At this point, the magistrate explained the principle of transferred malice and asked the defendant if, based on what he had already told the court, whether he wanted to continue with the trial and whether he was maintaining his not guilty plea.

Lowman said he was maintaining his not guilty plea and would continue with the trial.

He told the court that he had gone to take something for his girlfriend at the house where the virtual complainant was.

There was another man there with whom the defendant doesn’t get along and who is not related to his girlfriend.

Lowman said that he and the man got into an argument and they “squared up” to fight.

At that time, the minor was at the virtual complainant’s side, the defendant said, adding that he attempted to kick the other man, but the man put the child in the way, resulting in the child being kicked.

Lowman attempted to kick the man again, and the man took the same actions, again resulting in the boy being kicked a second time.

The defendant told the court that the incident occurred sometime after 9 p.m. and the only light in the room was from the television.

He said that the child did not say anything after the first kick.

“I didn’t know that he get kick,” Lowman said, adding that he left after the incident.

During cross examination, Lowman told the court that he had seen when the man who he (Lowman had attempted to kick) picked up the child.

When prosecutor Police Constable Corlene Samuel put it to Lowman that he knew that he had missed the man and had kicked the child, Lowman said that was not the case.

The prosecution further put it to the defendant that that was when he fired the second kick.

Lowman, however, said that was not the case.

The trial continues in August