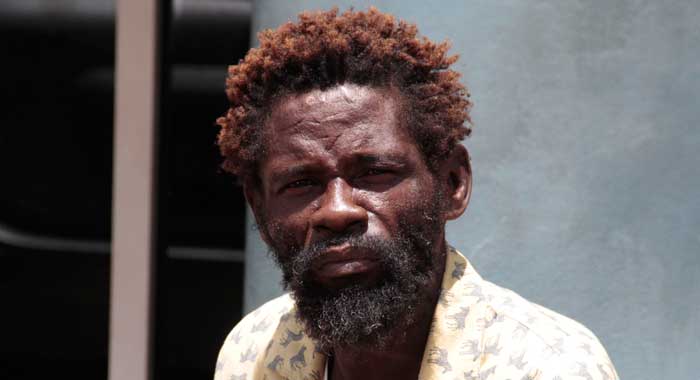 A one-legged man who hops around Kingstown and creates a public nuisance by emptying garbage bins onto sidewalks and harassing persons, was spared jail time on Monday.

Mark Gumbs, who is originally from Chauncey, pleaded guilty to a charge that on July 27, 2018, at Kingstown, he assaulted a Carriere woman, causing actual bodily harm.

The court heard that the virtual complainant does not know the defendant personally, but she sees him around Kingstown.

On the day in question, about 6:40 a.m., the virtual complainant, a pharmacist, was walking along the sidewalk near Coreas City Store.

As she passed Gumbs, he hopped up behind her. The woman became fearful and started to run and Gumbs came hopping behind her.

The woman fell and injured her leg and was unable to move for a few minutes, during which time Gumbs stood over her and laughed before hopping away.

Gumbs told the court that he did not “run” behind the woman with the intention of doing her anything.

He went down on his knees and begged Senior Magistrate Rickie Burnett not to send him to jail, saying jail is not a nice place.

He said that he receives $200 in public assistance every month and that his sister would help him to pay a fine.

When the magistrate asked if Gumbs has a record, the defendant said, “Yes, me record kinda dutty-ish. Me record real dutty (dirty).”

He went on to tell the court that his record is about 35 convictions, including “attempted rape, rape, cutlass”.

The magistrate, however, said that the matter was not one to send the man to prison for.

Burnett told Gumbs that he was giving him a last chance, adding that he had read somewhere that Gumbs interferes with persons in the city.

The magistrate said that while he was not taking into consideration in his sentencing what he might have read elsewhere, if Gumbs is a nuisance, the court has a duty to deal with him.

He imposed a three-month sentence suspended for nine months.

One of Gumbs’ legs was amputated several years ago.

During the earlier period when he first appeared around Kingstown, he used to use a pair of crutches.

He, however, told iWitness News after the court hearing on Monday that the mobility aids slow him down and he makes greater speed hopping on one leg.

Also, after his court appearance, the sister to whom he referred gave him some cash and admonished him not to use it to buy cocaine, suggesting that the man has a drug habit.