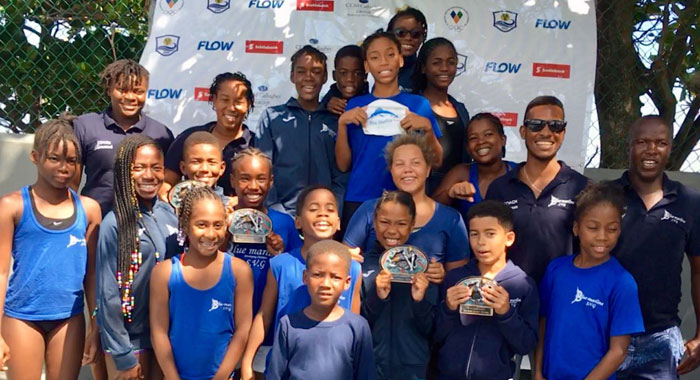 The 27 best swimmers of the Blue Marlins swim club demonstrated their prowess and ever-improving swim talent at the recently hosted annual Flow Invitational Swim Meet at the Shrewsbury Aquatic Centre.

The club featured all their stalwarts in a record-breaking and multiple personal best time achievement in the weekend of events with a 93 medal haul.

The youngest headliner, Hazen Dabriel, swimming in the 8 and under category, captured the age group champion as well as the sprint challenge champion.

Patrons were also reminded of Kennice Greene’s aquatic ability when she captured the girls 9 to 10 age group champion amassing 14 medals (7G, 6S, 1B) also breaking the 200IM and 200 Back national record.

Many new national records were established while other swimmers managed to qualify for the upcoming regional swimming meets namely the OECS Championship in November in Antigua and the CARIFTA Championships slated for Easter 2019.

The swim event continues to grow annually attracting regional participation and some patrons agree that it is surely becoming a premiere national swim event in the sporting calendar.