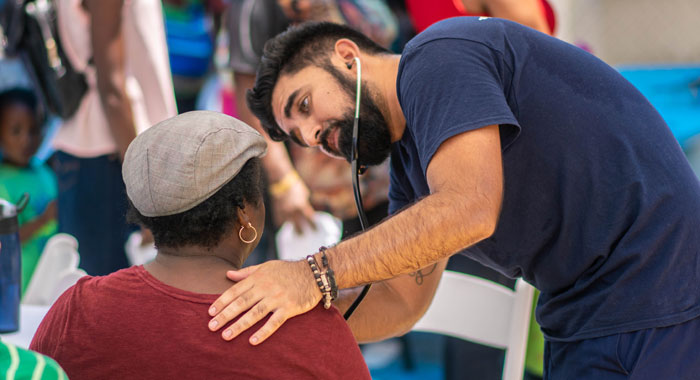 For a typical Vincentian, Saturdays are spent completing house chores and grocery shopping, but that was not the case last Saturday as members of the American Medical School Association (AMSA) consulted over 100 patients at the Flow and AMSA health fair.

The health fair was held on the Flow promenade and offered a series of health services, including blood glucose and blood pressure checks, eye checks, cardiac and respiratory exams, consultations and more.

AMSA representative Emile Garcia said the fair was a success after seeing about 130 patients.

She noted that the purpose of the fair was to encourage Vincentians to live a healthier life and better track their health.

Expressing much gratitude for the input of telecommunications company, Flow, Garcia said the company is an ideal representation to help champion such an initiative.

Meantime, Flow’s Marketing and Communications Lead, Nikala Williams said that she was grateful for the opportunity to collaborate with AMSA.

Williams said that with the increase in the number of Vincentians being diagnosed with diabetes, the Flow team believes that it will be life changing to help with the early detection of such ailments and further extended the company’s commitments to collaborate with AMSA to facilitate the execution of health fairs in various communities throughout St Vincent and the Grenadines.

She said that the Flow and AMSA health fair was inspired by the Flow back to school fair which included medical checks for kids before taking on the challenges of another academic year.

Williams said they are very enthusiastic about this drive to make St Vincent healthier one community at a time.