Man who didn’t harm deceased also jailed for his death 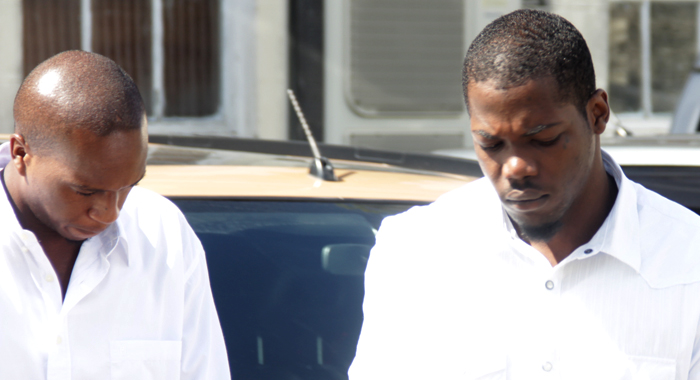 Imo MIller, left, and Donrick Richards as they return to prison after their sentencing on Dec. 7, 2018. (iWN photo)

A man who has spent five years in jail will spend almost four more in custody for the death of another man, simply because he was there when the crime was committed.

Imo Miller, 30, did not do anything to actually harm Horsand Glasgow during the Nov. 1, 2013 attack, in Canouan, that led to his death.

However, based on the legal principle of joint enterprise, Miller was as responsible for Glasgow’s death as Donrick Richards, 27, who told the court that he had “planned” (beat with the broad, flat side of a cutlass) the man about five times; hours after Glasgow had attacked him on the southern Grenadine island.

On Dec. 3, 2018, Miller and Richards, who were initially facing a murder charge, pleaded guilty, at the High Court, to the lesser charge of manslaughter.

The sentence will bring to nine years the amount of time that the men will spend in custody for their crime.

According to the facts agreed by the prosecution and the defence, Glasgow, a 26-year-old labourer, was working in Canouan when he met his death.

The court heard that the Othneilla Cupid, the girlfriend of the deceased, said that she and he were at home sometime after 11 p.m., on Nov. 1, 2013.

The court heard that Glasgow normally sleeps in that area of the house for some time during the night as the bedroom is usually uncomfortably hot.

While sleeping, Cupid heard her boyfriend cry out and immediately stumbled into the bedroom with blood about his body.

She looked through the sliding door and saw four men running away from the balcony.

She recognised Richards as one of the four men.

Glasgow later collapsed on the floor and Cupid alerted villagers, who assisted in placing him in a passing vehicle, which took him to the clinic.

Richards and Miller were among four persons who police arrested during their investigations.

Richards, told police that earlier in the day of the incident, he was in the area of the market in Canouan when he had an altercation with one “Dapa”.

Dapa told him, “The war ain’t done; it now start”.

Richards further told police that sometime after 7 p.m. he was hanging out when about 10 guys, including Dapa and “Head” attacked him and he received a stab to the left shoulder.

He said that his friend told him that they must “roll” back on Hassan and anyone in his group, but his intention was to roll back on Head, who was responsible for stabbing him.

Richards further said that Miller said they must go after the deceased at that moment and they all went where he was.

At that time, Miller had a long brown-handle cutlass while the others were empty handed.

Richards said that Miller started “planning” the deceased with the cutlass about his body and the deceased cried out.

They all ran from the scene.

But Miller denied Richards’ allegation and said it was Richards who had started to plan Glasgow with a cutlass.

Richards said that while he also had a cutlass also, he raised it and attempted to plan Glasgow but refused to do so.

Chad Ellis denied Richards’ allegation, saying that it was Richards who had told them that the deceased was sleeping on the balcony.

Ellis, however, acknowledged that he was there when the incident occurred and that he ran and went away with Richards to the home of one Pearlette Mason where they stayed for the rest of the night.

Keyshawn Ellis confirmed that an alternation had taken place earlier at the market between Dapp and Richards.

He said that later that night he received information that Dapa, Head and others had attacked and stabbed Richards.

Keyshawn Ellis further told police that he went to the clinic to see Richards and they left and went to Richards’ home.

While there, Miller came and said Glasgow was always watching him and screwing up his face and that he (Miller) was going to take over the war because they had stabbed Richards,

At the time, Miller had a cutlass in his hand, Ellis told detectives.

Keyshawn Ellis further said that they all went to the scene and Richards and Miller went to where Glasgow was sleeping on the balcony and started to chop him.

Keyshawn Ellis further said that he did not do anything and that he just looked on at what was happening.

He further told investigators that Glasgow immediately cried out and Richards, Chad, and Miller all ran and he walked away.

A post mortem concluded that Glasgow died of a stab wound to the thigh.

He admitted that he had, in fact, planned Glasgow several times with a cutlass.

All four men were subsequently arrested, charged and indicted for Glasgow’s murder.

In mitigation, Thomas told the court that his client was working in Canouan at the time of the incident.

He said that based on the agreed facts, some of Glasgow’s friends picked a fight with Richards during the day and then about 10 of them jumped him about 7 p.m. and busted his head, for which he had to go to the hospital for medical attention.

Thomas said that Richards then reported the incident to the police.

Up to that point, Richard had done everything right, Thomas said, adding that his client then committed the grievous error of going to Glasgow’s house.

He said Richards admitted to planning the deceased about five times, but not chopping him.

Thomas said that his client had no intention to kill or cause any serious injuries, adding that this is supported by the autopsy report.

The third wound was a 6 cm chop to the thigh, which transacted the femoral artery and the vein, which the pathologist said was the deadly wound.

A fourth wound was an abrasion to the right shoulder.

Thomas said that the kind of injuries suggest that Richards was correct when he said his intention was to “plan, to hit, to strike but not to chop”.

Meanwhile, Marks noted that Miller had pleaded guilty as soon as the manslaughter charge was open to him.

He said that based on the medical evidence, there was no clear intent to commit grievous bodily harm or to kill.

Marks further said that Miller was before the court based on the principle of joint enterprise.

“He didn’t raise a hand but he was part of the enterprise and admitted so.”

He said the deceased, the defendant, and their friends are young people.

“This is an example of where a foolish decision can make you end up in some very hot water.”

He said that with the benefit of hindsight, the men would have acted differently.

Marks said that both defendants have good prospects of rehabilitation and asked that they be given credit for the remorse they have shown in their guilty pleas.

He said that the court should be mindful that the deceased had his part to play in the incident and that there was provocation “in the ordinary meaning of the word.

“Perhaps not in the legal way. There was provocation in the ordinary meaning of the word, where Richards was beaten, humiliated, stabbed, injured.

“His reaction was foolish and he did everything right up until being convinced either by himself or others to seek revenge for the humiliation that he would have suffered at the hand of the virtual complainant. So the deceased, in this matter, is by no means a saint and the evidence shows that,” Marks said.