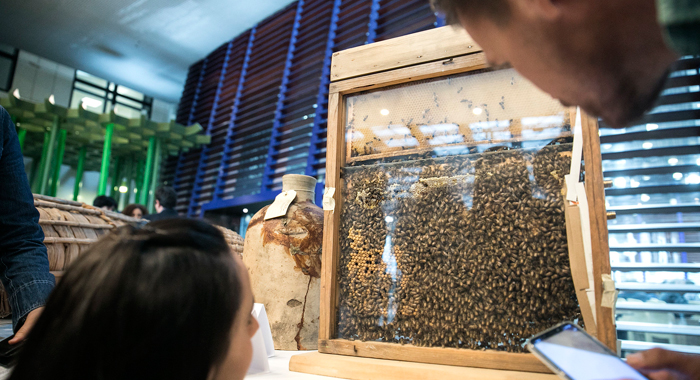 FAO urges countries to step up efforts to protect our crucial allies in fight against hunger, as it observes World Bee Day

The global decline in bee populations poses a serious threat to a wide variety of plants critical to human well-being and livelihoods, and countries should do more to safeguard our key allies in the fight against hunger and malnutrition, FAO stressed Monday as it marked UN World Bee Day.

Bees and other pollinators are declining in abundance in many parts of the world largely due to intensive farming practices, mono-cropping, excessive use of agricultural chemicals and higher temperatures associated with climate change, affecting not only crop yields but also nutrition.

If this trend continues, nutritious crops such as fruits, nuts, and many vegetables will be substituted increasingly by staple crops like rice, corn, and potatoes, eventually resulting in an imbalanced diet.

“The absence of bees and other pollinators would wipe out coffee, apples, almonds, tomatoes and cocoa to name just a few of the crops that rely on pollination. Countries need to shift to more pollinator-friendly and sustainable food policies and systems.”

“Even growing flowers at home to feed bees contributes to this effort,” he added.

Slovenia, together with FAO, was instrumental in establishing the international day through a UN General Assembly resolution in 2017, with support from Apimondia, the International Federation of Beekeepers’ Associations.

Bees are among the hardest working creatures on the planet providing the important ecosystem service of ensuring pollination and thus reproduction of many cultivated and wild plants, which is crucial for food production, human livelihoods and biodiversity.

Bees and other pollinators such as birds and bats, affect 35 per cent of the world’s crop production, increasing outputs of 87 of the leading food crops worldwide, plus many plant-derived medicines.

About two-thirds of the crop plants that feed the world rely on pollination by insects or other animals to produce healthy fruits and seeds for human consumption. Pollination benefits human nutrition – enabling not only the production of an abundance of fruits, nuts and seeds, but also more variety and better quality.

FAO carries out various activities to encourage pollinator-friendly practices in agricultural management, including the Global Action on Pollination Services for Sustainable Agriculture and the International Pollinators Initiative.

FAO’s recent State of the World’s Biodiversity for Food and Agriculture report also stresses that many species, associated with biodiversity, including bees, are under severe threat, and calls on governments and the international community to do more to address the core drivers of biodiversity loss.

Another study entitled Assessment of Pollinators, Pollination and Food Production issued by the Intergovernmental Science-Policy Platform on Biodiversity and Ecosystem Services (IPBES), with input from FAO experts, highlights a number of ways to effectively safeguard pollinator populations to ensure food security and preserve biodiversity.

This year marks the second observance of World Bee Day and Monday’s event in Rome, aiming at raising awareness of the role of bees and pollinators in food and agriculture, was organised by FAO in partnership with the Government of the Republic of Slovenia and Apimondia. This event took place in parallel with an observance at the UN headquarters in New York.