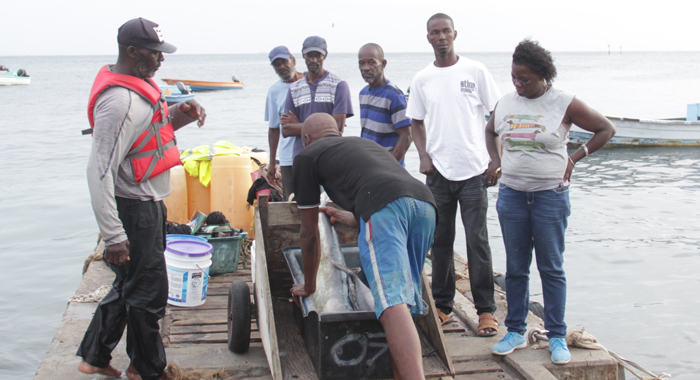 A fisherman lands a catch in Calliaqua on June 10. (iWN photo)

The value of the 2.5 million pounds of fish landed in 2017 was EC$18.7 million, Prime Minister Ralph Gonsalves said at the end of the month of activities, which culminated with Fisherman’s Day on June 10.

“In other words, the value went up by $6 million –more than half what it was before,” he said.

“And leh me tell yuh this: tha’ ain’t all the fish de fisherman dem catch, yuh know. Because, as you know, some fisherman, when they out at sea, if a fella come by and want de fish and so on to go Grenada and want it to go Martinique, yuh just sell it in de sea water one time.  Yuh know that happen. But I am talking about what landed here in St. Vincent and the Grenadines.”

He said that in the first three months of 2019, the weight increased by a further 23 per cent and the value by nearly 12 per cent.

“If this trend continues, we are going to pass the $20 million mark,” the prime minister said.

“And one of the things I want to say to young people, I want to say this to them: the fishing industry is a good place to make a good and decent living.”