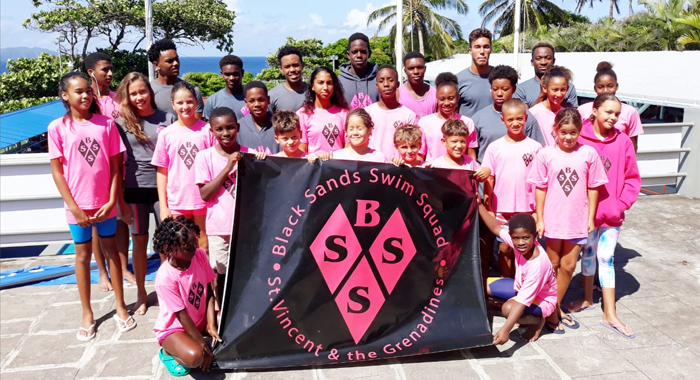 Swimmers from Black Sands Swim Squad made up 34 of the 84 athletes that competed in the FLOW SVG National Invitational Swimming Championships, Aug. 14 to 18 at Shrewsbury Aquatic Centre.

There were many personal best swims swam at the event and BSSS totalled a medal count of 190 medals: 87 Gold, 68 Silver and 35 Bronze.

Eltonique Leonard broke 3 records in the girls 8 and under group.

Kevern DaSilva broke 3 records in the girls 11 to 12 age group.

Abigail Deshong broke 2 records in the girls 11 to 12 group.

Eltonte Leonard broke the 50 meter butterfly record in the boys 11 to 12 age group.

BSSS Coach Kyle Dougan said he was over the moon with the results from ALL BSSS swimmers over the 5-day competition.

He said that swimming in St Vincent and the Grenadines has now got to a very high standard from all the swimming clubs and he is looking forward to the continued improvements from our young athletes.