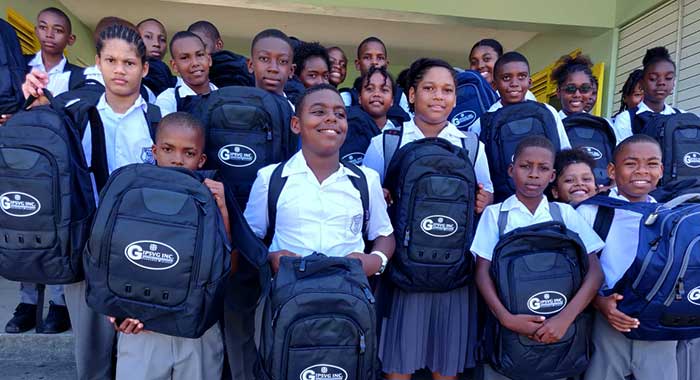 GIPSVG Inc. is a New York-based organisation that began the distribution programme in 2016.

The programme caters for the four primary schools in the Garifuna communities of Overland (Tourouma), Sandy Bay, Owia and Fancy.

The group’s president, Marsena Ballantyne said that in 2016, 2017 and 2018, only the top three performers in each school received a book bag.

And, this year, with the intention to “not to leave any child behind”, each of the students — a total of 76 — were presented with the book bags which contained, geometry sets, notebooks, scientific calculators, thumb drive, water bottles, highlighters, graph books, and other stationery.

In a written note, members of the organisation wished the recipients all the best as they begin their new academic journey.

Meanwhile, in August, the annual award ceremony was held at the Fancy Government School to present monetary donations to the top three and most improved at CPEA students.

Five of seven students were successful at this year’s CPEA examination.

Past students and members of the Facebook group  “Fancy_ Roots SVG” made the donations.

The annual monetary awards started in 2015, as a result of the Rock Gutter Tragedy, which claimed the lives of seven children from the community in January of that year.