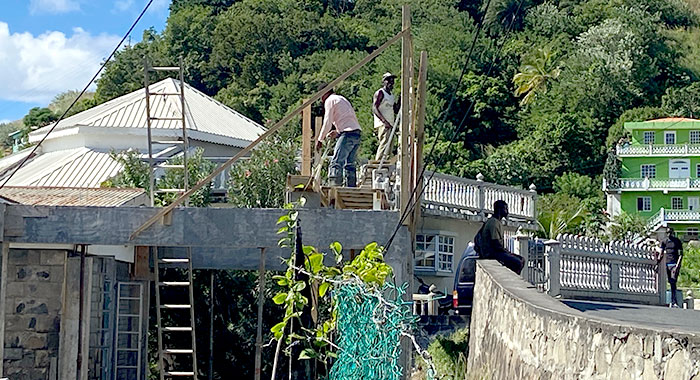 Construction work at the Campden Park Clinic has brought the building within a few feet of the main road. (iWN photo)

Member of Parliament for South Leeward, Nigel Stephenson is raising questions about the size of the reinforcement steel rods used in on-going construction at the Campden Park Clinic and the distance of a new part of the building from the main road.

“… as a matter of fact, it is less than two feet from the road that they are actually building,” he said recently on the New Democratic Party’s daily radio programme on NICE Radio.

“And a private person that is constructing a home, they want to tell you that you must step in about at least 10 feet from your boundary or from the road,” he further told New Times listeners.

“But you can stop from the road and step into that building. What precisely are they doing there? I am watching, I am looking to see what is happening there but I can assure the people of Campden Park that I am watching that with a hawk’s eye to see what is taking place,” he further said.

Stephenson, a former teacher, said that he is “not even a bush engineer” but common sense dictates certain things in construction.

He noted that he has asked about the repair of the clinic so many times in Parliament, that former Minister of Health, then-senator Luke Browne said it was the most-frequently asked question in the national assembly.

Stephenson said that the government is finally repairing the building but “not a single person from Campden Park is working there, which is terrible.

“But what is even more alarming to me is that they have some ring beams there, I would say about 20 inches or probably more and they actually use half-inch steel in these ring beams.”

He said that the size of the ring beams suggests that something will be built on them.

“And when you carry up [a brick] wall, you are not talking about drywall or sheetrock, which is lightweight by nature. What they are going to be doing there is build [concrete] blocks upon that.

“… but you can’t use half-inch steel in those. That would not be able to take the weight of all that blocks plus the roof going onto it. At a minimum, we have to use three-quarters, but one-inch steel, to my mind, is the best-suited material for that.”

He accused the government of “cutting back” on the material used in the construction project.

“You’re building — you want to have something that looks good, but how long is it going to last? We are talking about the integrity of the building here. Nobody wants a building that is going to crack up soon after construction or a building that may fall apart.

“So the question is, why are they using substandard material to reconstruct that clinic or to repair the clinic in Campden Park? I am wondering if this is something that is standard, this is the standard procedure for all government building or if they are actually short-changing the people of Campden Park by building with that sort of material,” Stephenson said.

He noted that the government has spoken in Parliament about the need for persons to adhere to the building code.

“And when it comes to the building code, they are telling you that there are certain standards that are required when you are constructing. So they are talking about the quality of the materials and all of this.

“And for poor people, they want to impose this standard upon, and for the government, they throw that through the window and they are using substandard materials. So, how is it that we can have this sort of double standard…?”