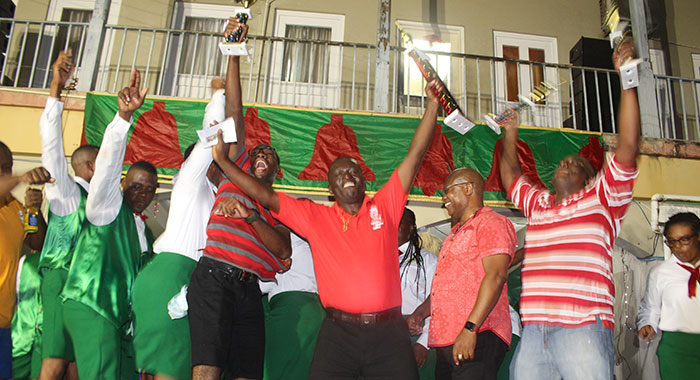 In an almost clean sweep, the Traffic Angels has successfully retained the championship trophy in the senior choir competition of the Police Cooperative Credit Union Police Carolling Contest 2020.

In what some patrons referred to as “one of the best” police carolling contest they have ever witnessed, the atmosphere at Central Police Station was very festive and electrifying – as eight senior choirs and seven junior choirs competed for the top prizes.

The two carols that catapulted the Traffic Angels to the top position were “Oh Come All Ye Faithful” in the traditional category and “Unique Christmas in Vincy” in the original category.

Western Carollers took the second position with renditions of “Oh Come! Oh Come Emmanuel” and “It’s Gonna be Okay”; while Training Carollers placed third with “Do You See What I See?” and “Rona Christmas”.

In their flamboyant outfit, the Traffic Angels were again adjudged the “Best Dress” choir. They also copped the Best Traditional Carol title and tied with Western Carollers in the “Best Speech” category. Western Carollers won the title for Best Original Carol.

Several artistes made guest appearances. These include, Vincentian superstars  the Melisizwee Brothers, Lola, Urias Little and Randy “Luta” Mc Intosh. The Gazetted Officers Choir also made a guest appearance and sang “This Comes to Pass” and “Put Jesus in your Christmas. The judges were Penola Ross, Aubrey Gould and Earl Paynter. The master of ceremony was Shevrell “Candy Man” Mc Millan.

Commissioner of Police, Colin John  expressed appreciation to the sponsors, the members of organising committee, the judges, patrons, guest artistes and everyone who would have contributed in some way to the successful hosting the 2020 Police Carolling Contest.

Coordinator of the carolling contest, Assistant Superintendent of Police Junior Simmons said that after the competition had concluded, one of the judges suggested that the RSVGPF should seek to have a regional Police Carolling Competition between the police forces in the region.

Simmons described the idea as a brilliant one, saying, “It certainly will be discussed with the police hierarchy and members of the organising committee to look at feasibility of hosting such a competition.”

The carolling contest was held under the theme “Oh What a Year! Time to Spread Some Christmas Cheer.”