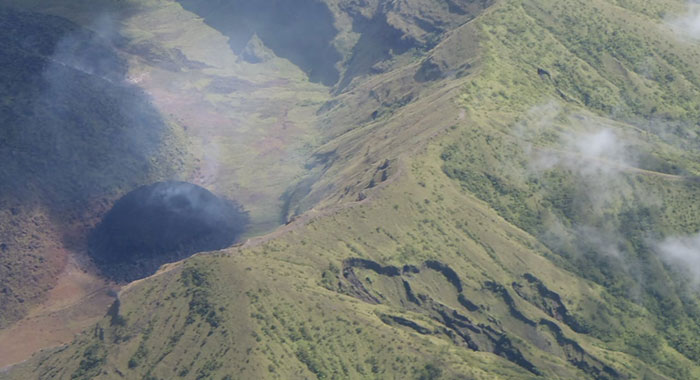 An aerial photo of La Soufriere, taken on Wednesday, shows that the satellite dome had expanded in size. (Photo: NEMO St. Vincent and the Grenadines/Facebook)

An aerial reconnaissance conducted on Wednesday indicated that there are no significant changes at the La Soufriere volcano since the previous day, when an effusive eruption was noted at the 4,048-foot mountain.

The National Emergency Management Organisation (NEMO) said magma continues to ooze to the surface and the new dome has increased in size.

The Executive Committee of NEMO, which comprises technical officers from the various government departments, private sector and non- governmental organizations met Wednesday at NEMO’s conference room to activate plans, in the event that the level of seismicity increases and evacuation becomes necessary.

The Caribbean Disaster Emergency Management Agency (CDEMA) has activated the regional coordination plan as per the protocol, which corresponds, to the orange volcano hazard alert level, to which the alert was raised after Tuesday’s eruption.

Orange is the third highest on the four-level scale, with red being the highest.

The orange alert means there is a highly elevated level of seismicity or fumarolic activity or both and that eruptions may occur with less than 24 hours notice.

With the orange alert, residents of the northern third of St. Vincent — from Georgetown to Fancy, in the east, and Belle Isle to Richmond in the west — have been told to prepare to evacuate at short notice, should such an order be given.

All residents of the country are strongly advised to listen to and heed NEMO’s advisories.

In keeping with the usual preparatory arrangements for potential hazard impact responses, the CDEMA Coordinating Unit has placed the following regional response mechanism teams on alert:

A group of scientists from the Seismic Research Centre, University of the West Indies St. Augustine Campus, led by Vincentian Professor Richard Robertson will arrive in St. Vincent and the Grenadines today, Thursday on board the Regional Security System aircraft.

The scientists will install instruments to strengthen the monitoring mechanism system, so that more accurate and timelier scientific advisory on the activities at the La Soufriere Volcano can be provided, NEMO said.

NEMO reminded the public that no evacuation order or notice had been given.

“NEMO is also appealing to the public to desist from visiting the La Soufriere Volcano until the scientists advise that it is safe to do so,” the advisory said.