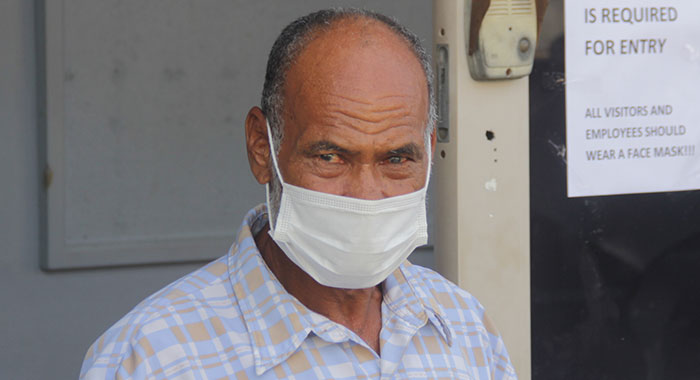 A farmer who stole another farmer’s goats will have to pay EC$510 in compensation by Jan. 29 to avoid six months’ jail time.

Further, for his crime, Ashford Lorraine, 57, of Owia, is bonded to keep the peace for one year.

If he breaks the bond, he would have to pay the court EC$1,500 forthwith or go to prison for six months.

Lorraine appeared before Senior Magistrate Rickie Burnett, on Monday, at the Kingstown Magistrate’s Court, where he pleaded guilty to a charge that between Dec. 22 and 24, 2020, he stole a grey and black ewe goat valued at EC$350 and a white ewe valued at EC$160, the property of fellow villager and farmer, Edward Lavia.

Presenting the facts, prosecutor, acting Police Corporal Corlene Samuel said that on Dec. 22, Edward Lavia, a farmer, of Owia, tethered the goats on a piece of land at Cramacou about 6:30 a.m.

When he returned to tend to the animals two days later, Christmas Eve, he discovered the two animals missing.

Acting on information, police took the defendant into custody and he gave a written statement in which he admitted to the theft.

Reading from the caution statement, the prosecutor told the court that the defendant sold the two animals to one Terrance, of Byera, for EC$350 each.

He further said that he was intoxicated at the time and that is why he sold the goats.

In mitigation, Lorraine told the court that he had gone to Lavia, apologised and offered to pay him for the animals.

In his sentencing remarks, Burnett spoke of a video published on the weekend, in which residents of Fancy told Kenton Chance of iWitness News that they were reluctant to leave their homes, livestock and produce should evacuation be ordered as a result of ongoing eruption of La Soufriere volcano.

“People would rather risk their lives to protect their property,” Burnett said.

“This (praedial larceny) is a problem in St. Vincent and the Grenadines and the farmers are suffering,” Burnett said.

“Look at what he has done on Christmas Eve, when mutton is in abundance. This is not an abstract thing, this is real,” Burnett said.

Before handing down the sentence, Burnett reprimanded the defendant saying, “What you did was wrong! You know what’s going to happen, the four, five reporters here are going to plaster your face all over the news for people to see and you know what those in your community would call you? ‘Animal thief’.”