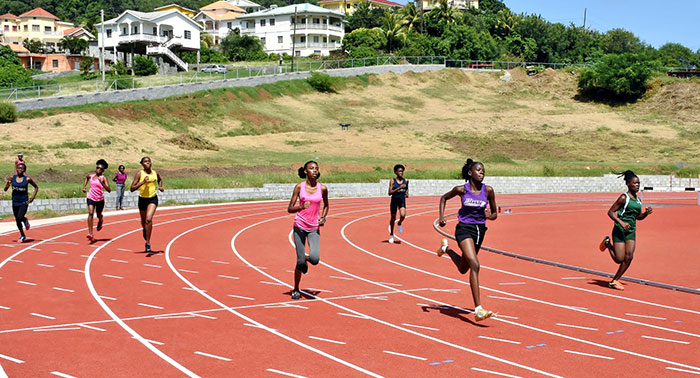 The athletics track at Diamond. (FIle photo by Lance Neverson/Facebook)

There will soon be round-the-clock security at the Sir Vincent Beache Athletics Track at Diamond, which is being “abused” mere months after its “soft opening”.

Speaking in Parliament during the Budget Debate, Minister of Sport, Frederick Stephenson, noted that the athletic track and football field, which have been completed, are part of what is intended to be the national stadium.

“However, we have seen sometimes and the latest video we have seen coming from the athletics track are of some little children, who were there, I was told, with their parents.

“They went to visit the track — because an area of the fence is left exposed for the residents of Diamond, not on the housing side of Diamond, but the old Diamond village,” said Stephenson, who represents South Windward, the constituency in which the facility is located.

He said that the area of the fence was left open as an access path for residents to use as a shortcut to the road.

“… and so, from time to time, persons go down to the track and walk around and we saw a video of some of the children, because the pole-vault area, that little area was left uncovered. It has a cover but they had taken off the covering and we saw some little children going from the side, picking up handfuls of sand, earth, and throwing it in the hole there.

“But I want to appeal to the persons who go down to the track and if I may say now, as I speak, we are constructing a security booth there at the track and we have also 24-hour security now at the athletics track in Diamond.

“We have to understand that a new development like the athletics track at Diamond would push St. Vincent and the Grenadines, our athletes, to the next level.

“The athletics track down there, at Diamond, can host lots of top-class athletics tournaments and I want to appeal to our people, the people of St. Vincent and the Grenadines, not to abuse the track but to appreciate the track.

“The track will be there for as long as we take care of it. So my appeal, again, to our people, to appreciate the track and not to abuse the track.”

The sports minister said that there is about EC$4.75 million in the Budget for the construction of a warm up track, bathroom, locker room facilities, storage facilities, track and field equipment, parking lot, concession stands and additional drainage and site works.

“So in 2021, we will see much improvement there at the athletics track,” he said.